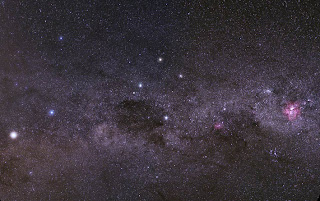 Southern Cross Panorama.
Thanks to Chris Picking for permission to use this magnificent photo.
(click on image for a larger view)
No comments:

My earliest memory is of one 5th of November, when I was about 3.  We were going to the village green to see the fireworks, and when I asked 'what are fireworks?'  My father told me they were pretty lights of fire in the sky.
As dusk fell we arrived at the green. I was very excited as there were lots of people and I'd never been out after dark before.  My father hoisted me up onto his shoulders and I clutched him around the top of his head, feeling very high and important.  As my eyes became used to the dark I looked upwards, and what I saw made me gasp in delighted wonder.  The blackness was completely full from horizon to horizon with the most glorious, random sprinkling of tiny lights!  I remember saying "Daddy! Look!  The fireworks have already started!"  The fact that he responded gently with "No love, those are the stars.  They are always there" did nothing to diminish my heart-bounding sense of intense wonder.  I don't remember being very impressed with the fireworks later when they did begin, it was more than enough to watch the static display of stars above my head.
Since then, the stars have always drawn me.  Like many, I find the sight of the clean bright points of light in the sky to have a great fascination, even though now I know what they are, and view them most often as objects of scientific, rather than aesthetic interest.  I have a couple of friends who have telescopes, and I've seen the craters on the moon, and the moons of Saturn.
But I still sometimes wander outside at night and just lie on the lawn looking up.  I live in town now, and the street lights' competition reduces the number so I only see a fraction of what is out there.   But when I go camping, or stop on a country road and turn the headlights off, the stars can still take my breath away.
3 comments: 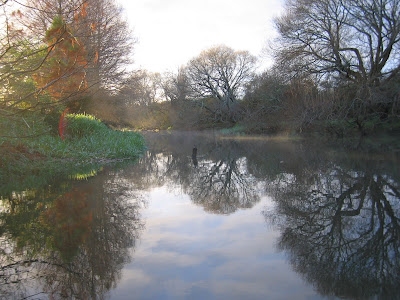 It's been pretty hot here the last few days.

A lovely pastime in the heat is to go kayaking, as there always seems to be a cooling breeze under the willows.  Our local river is still tidal up here near the house, so if I plan it right, I can go down and then paddle back with the rising tide.
I kayak with friends, but I'm equally happy to go by myself, with my little dog as figurehead. She seems to love watching the water slide by underneath her.
The water birds like the mallard, kingfisher, cormorant and pukeko often just go about their business.
The tranquility of the river is wonderfully soothing.
It's a good thing to take quality time alone in a place you love.
No comments: