In January of 1990 we went camping and brought home a self-reliant little black puppy that had been living rather poorly on fish bits tossed to him by campground fishermen, and what other scraps he could beg. He was a very active tyke and we named him Bobby. He seemed to have springs in his legs.  He must also have been older than he looked, possibly stunted, because by spring of 1990 Alice my airedale had produced a huge unplanned litter of Alice-Bobby puppies. In January of 1991 I only had three months to go of my own third pregnancy and was looking for homes for the last thee puppies.  I wrote a poem about it all, which I have recently stumbled upon. It wasn’t a particularly happy mistake, but I guess my young sons learnt a bit about unplanned reproduction and the consequences at the least. It's also not a brilliant poem, but it was the best I could do at the time I suppose.


Like many things truly amazing
They appeared with ease.
Bobby was keen,
Alice did what was required,
Seemingly indifferent, matching mine.
But eleven puppies! Oh Lord!
Dreadful for me
The first decision, the first six
Dispatched in batches as
They appeared,
shiny wet helpless butterballs.
The vet’s assistant
Comforting me as I sobbed
Pregnant myself.
And today the last three are now gone.
Four months of naming, growing, tumbling,
Walks, play, licks and cuddles.
Your lives saved
then given away,
In cardboard boxes.
Two to a guy in Thames
One to a guy up the Coro.
Easy come, easy go.
But not for me.

Up a Tower Monking

About the last six weeks or so, for a couple of days each week, I have been being rather Monkish.

A bit of background. A few years ago my former art tutor James Ormsby discovered that an ancestor of his had copied and illuminated a psalter, which is part of the collection in the Bodian Library.
He decided he too would write out parts of the bible and illuminate them, and has done some very interesting and beautiful work, even to my non-religious eyes.

At present, he has an exhibition ‘Tu’, of his work in the local Tauranga Art Gallery. As part of the exhibition, he decided he, or someone, would work, during opening hours, on another manuscript, but up a tower with the the work slowly cascading down the side of the tower as it progressed. He is writing out Revelations, backwards, and in Maori.
He talked me and two other friends into writing and illuminating a work too. We are together writing out the Tauranga City Council Vehicle Regulations. At any time each day, there’s usually someone up the tower working away. 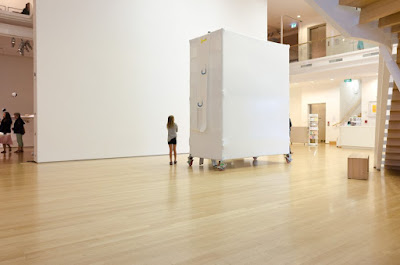 It has been a fascinating experience. We have ‘taken a vow of silence’ and don’t engage with visitors through talk, but can answer people’s questions called up to us, by writing on pieces of paper and tossing them down. We wear a dark brown hoodie, with the hood up.  I feel a certain pressure to write Wise Words, which is not always easy when the question is something like 'Do you eat up there?'

We’ve done about six weeks and the writing is done. We are now working on the illustrations and illuminations. Two weeks to go. The general theme of my own illustrations is 'nature one can see from a car'.  So far I have been painting a lot of gulls eating chips.  I might move on to gulls on lampposts.

‘Tu’ means ‘the space between’. 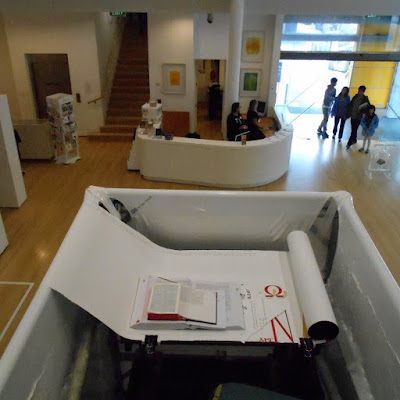 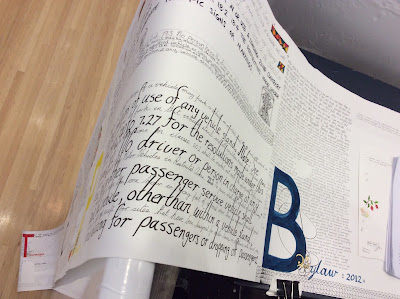 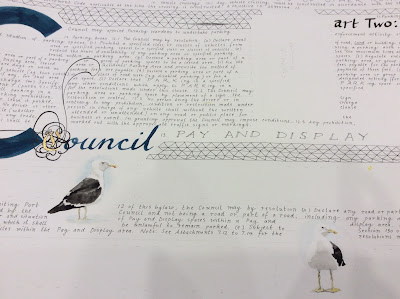 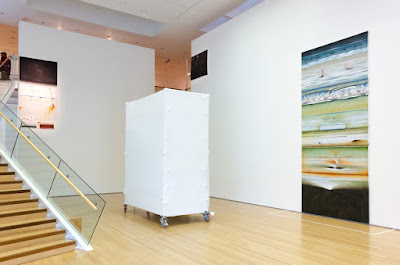 The Battle of Gate Pa

This is one of the best descriptions I have ever heard of a battle that took place near my home here in Tauranga (better pronunciation is 'Toe-Rong-a' or Toe-Rang-a, both with a soft g).
I hope you enjoy it.  Allow 30 minutes. Worth it.