She even has the Kiwi accent well.  It's not easy, apparently.


A friend has given us a couple of old typewriters and we have been having fun tapping away.  For some strange reason it's much easier for me to think using an old typewriter than on a computer keyboard.  This is not to excuse my absence from the world of blog.

Coincidentally these images put the two together.  Now that would be fun! 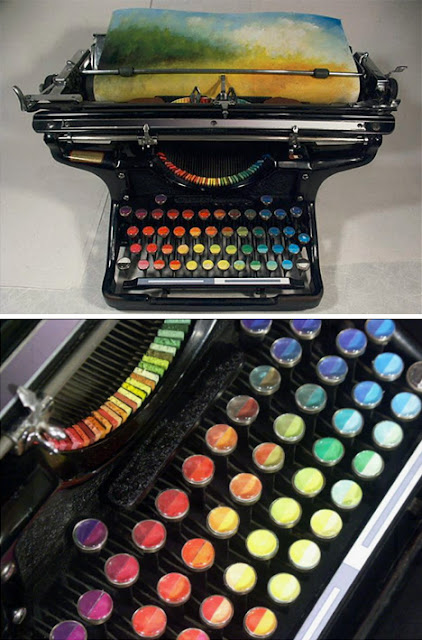 Me:  Good morning Kate speaking.
Her: Harlor dis is [unintelligible] speaking from [unintelligible].  How are your torday?
Me: (warily) I don't think I asked.. um.. that business to contact me...
Her:  Wha di your say?
Me: (more firmly) I don't engage in conversations with businesses that I haven't asked to ring me.
Her: (small pause, then:) Well, why di your answer your phon?
Me: (speechless) .... !

Not being able to think of a suitable response.... I hang up the phone, albeit with a smile on my face.

OK, well, what would you have said?
22 comments:

Thoughts on Going Through My Books


The lounge is a literary explosion.  You have to thread a path through the teetering stacks.
I've been going through all my books; 739 so far.  Cleaning them, repairing them, cataloguing them using the great Delicious Monster Library (2) software, and, as you can imagine, frequently getting side-tracked in them.

It's like a journey into my past (self-help books, raising-children or -dogs or -poultry books) and into the future (art books, be-financially-secure books, decorate house books).

But it's also really fun in this present moment.  I'm getting organised, having a throw-out, and having a good rethink of where I've been and where I am now, and where I want to be soon.

Some of my books I've greeted as old friends.   I have either read them to myself as I grew up, or read them to my children as they grew up.  Authors like Paul Gallico, A. A Milne, Lynley Dodd, Helen Oxenbury, Allen Ahlberg, Anna Sewell, Stephen Biesty and Doctor Seuss.

Some books have made me look at life a different way, helped me when times were tough and I felt lost, like Ashley Brilliant, Robert Fulghum, John Gray, Richard Carlson, Robert Kiyosaki, Susan Jeffers and Sue Patton Thoele.

When we moved into the worker's house on the family farm and I was establishing the garden and madly planting trees, shrubs and vegetables, my Reader's Digest Gardening Guide and New Zealand Native Plants were my faithful and constant companions.

When I went back to school to do Bursary painting and art history, I'd have been lost without my own copy of Gill Docking's Two Hundred Years of New Zealand Painting.

And of course there is favourite, much revisited fiction:  Jane Austen, Charles Dickens, Shakespeare, Roald Dahl, Maeve Binchy, John Steinbeck,  Isaac Azimov...
For a long time when my head wouldn't turn off, Terry Pratchett was the answer; read last thing at night when the kids were tucked up, laughing aloud at the antics of humankind, or pensive  about the human condition, thinly-disguised in the lives of fantasy characters on a fantasy world.
Recently I've been surprised to discover I love the absorbing and witty Patrick O'Brien's Aubrey-Maturin seafaring series...

In the last five years I have acquired dozens of science, and art books, as I attempt to meld the two disciplines together in my art practice.  It's been like trying to bang both round and square pegs into triangular holes....

Now, not because it's the best bit of writing in the world (although it's pretty jolly good), but mostly because I've just stumbled across it again, here's a bit of Robert Fulghum from It Was on Fire When I lay Down on it - a little untitled chapter typical of his style, which, now I think about it, is really a lot like a blog post.

"After the dishes are washed and the sink rinsed out, there remains in the strainer at the
bottom of the sink what I will call, momentarily, some “stuff.” A rational, intelligent,
objective person would say that this is simply a mixture of food particles too big to go
down the drain, composed of bits of protein, carbohydrates, fat, and fiber. Dinner
dandruff.
Furthermore, the person might add that not only was the material first sterilized by the
high heat of cooking, but further sanitized by going through the detergent and hot water
of the dishpan, and rinsed. No problem.
But any teenager who has been dragooned into washing dishes knows this explanation is
a lie. That stuff in the bottom of the strainer is toxic waste—deadly poison—a danger to
health. In other words, about as icky as icky gets.
One of the very few reasons I had any respect for my mother when I was thirteen was
because she would reach into the sink with her bare hands—BARE HANDS—and pick
up that lethal gunk and drop it into the garbage. To top that, I saw her reach into the wet
garbage bag and fish around in there looking for a lost teaspoon BAREHANDED—kind
of mad courage. She found the spoon in a clump of coffee grounds mixed with scrambled
egg remains and the end of the vegetable soup. I almost passed out when she handed it to
me to rinse off. No teenager who wanted to live would have touched that without being
armed with gloves, a face mask, and stainless-steel tongs.
Once, in school, I came across the French word ordure, and when the teacher told me it
meant “unspeakable filth” I knew exactly to what it referred. We had it every night. In
the bottom of the sink.
When I reported my new word to my mother at dishwashing time, she gave me her myson-the-idiot look and explained that the dinner I had just eaten was in just about the
same condition in my stomach at the moment, rotting, and it hadn’t even been washed
and rinsed before it went down my drain. If she had given me a choice between that news
and being hit across the head with a two-by-four, I would have gone for the board.
I lobbied long and hard for a disposal and an automatic dishwasher, knowing full well
that they had been invented so that nobody would ever have to touch the gunk again.
Never mind what any parent or objective adult might tell me. I knew that the stuff in the
sink drainer was lethal and septic. It would give you leprosy, or something worse. If you
should ever accidentally touch it, you must never touch any other part of your body with
your fingers until you had scalded and soaped and rinsed your hands. Even worse, I knew
that the stuff could congeal and mush up and mutate into some living thing that would
crawl out of the sink during the night and get loose in the house.
Why not just use rubber gloves, you ask? Oh, come on. Rubber gloves are for sissies.
Besides, my mother used her bare hands, remember. My father never came closer than
three feet to the sink in his life. My mother said he was lazy. But I knew that he knew
what I knew about the gunk.
Once, after dinner, I said to him that I bet Jesus never had to wash dishes and clean the
gunk out of the sink. He agreed. It was the only theological discussion we ever had.
My father, however, would take a plunger to the toilet when it was stopped up with even
worse stuff. I wouldn’t even go in the room when he did it. I didn’t want to know.
But now. Now, I am a grown-up. And have been for some time. And I imagine making a
speech to a high school graduating class. First, I would ask them, how many of you
would like to be an adult, and independent, on-your-own citizen? All would raise their
hands with some enthusiasm. And then I would give them this list of things that grownups do:

I’d tell the graduates that when they can do these things, they will be adults. Some of the
students might not want to go on at this point. But they may as well face the truth.
It can get even worse than the list suggests. My wife is a doctor, and I won’t tell you
what she has to do sometimes. I wish I didn’t know. I feel ill at ease sometimes being
around someone who does those things. And also proud.
A willingness to do your share of cleaning up the mess is a test. And taking out the
garbage of this life is a condition of membership in community.
When you are a kid, you feel that if they really loved you, they wouldn’t ever ask you to
take out the garbage. When you join the ranks of the grown-ups, you take out the garbage
because you love them. And by “them” I mean not only your own family, but the family
of humankind.
The old cliché holds firm and true.
Being an adult is dirty work.
But someone has to do it."

- Robert Fulghum.  From It Was On Fire When I Lay Down on it.