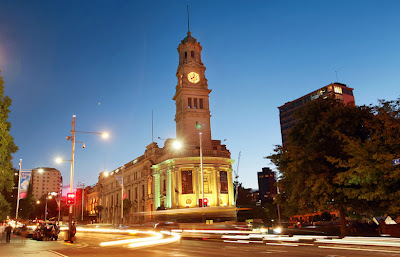 Last night the two young people and I were party to a dissection at the Town Hall.

Franz Joseph Haydn wrote the 'Surprise' symphony (Symphony No.94) and for a delightful hour last night at the Town Hall in Auckland, it was taken apart and its bits analysed.
It was great fun listening to conductor Graeme Abbott discuss the background to this work, and share his infectious enthusiasm for the characteristics and some of the details of the music, movement by movement.  We learnt that the first movement begins with a dialogue between three wind instruments and the strings, that the surprise loud chord in the familiar second movement is a joke because afterwards the orchestra just carry on playing as if nothing happened.  (Haydn apparently remarked 'that will wake the ladies up!'  Apparently, much like his work, he was bouncy and jolly, and loved practical jokes, and above all, originality.)

A member of the audience was invited to dance a minuet with the conductor to demonstrate the usual speed, and to show how very funny it was that Haydn had asked for the third 'minuet' movement to be played allegro molto - sped up so much it would have been absolutely impossible to dance to (unless you were perhaps doing Maria and Baron Von Trapp's dance the Lendl to it - which is what it ends up sounding like).  Haydn started what was to become very trendy; the incorporating of peasant country dance rhythms into music.

This was one of the works of this incredibly prolific*, popular and ground-breaking composer who was not only Mozart's good friend but also Beethoven's tutor.

In a nice touch, the sub-group of 41 Auckland Philharmonia Orchestra members that performed extracts and finally played the whole symphony for us last night, numbered almost exactly the same number of 40 members of the London orchestra that first performed it for the first time 222 years ago, with Haydn at the piano.

Here's the second movement.  I'll be surprised if you don't smile at the surprise, even if you've heard it before.

It's not raining in my heart...

...but it is raining from Wellington to Tonga at the moment! 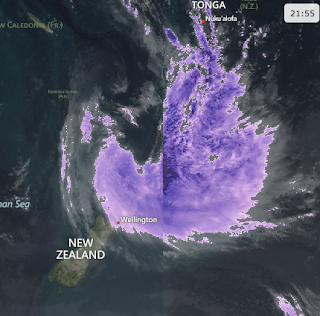 It's probably just a coincidence that the colour of the rain on the satellite map is almost the same colour as the wisteria on our verandah. 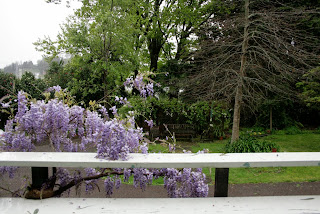