... And it's jolly cold in the house, but my bed felt just right, the way I like it, and the shower water was deliciously hot after just one night of heating.
However the leaves have not, contrary to hopes, blown themselves away. The good news is, the sun is shining and my back is strong and my arms are raring to go! 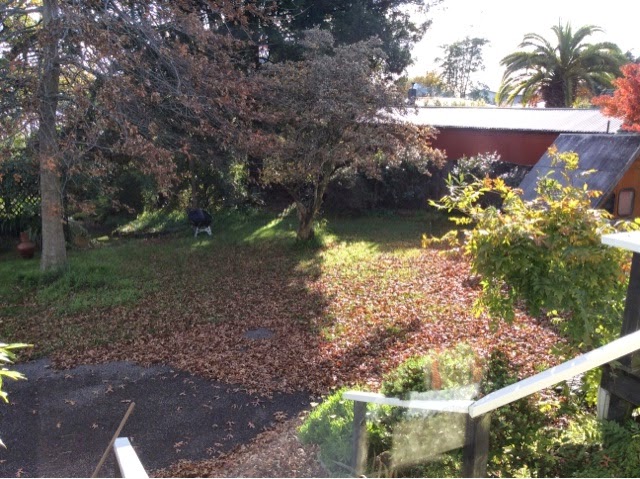 A Morning Glory by any other Name

When I was young I stayed with my Russian grandmother.  It was for a fairly extended time as my mother was in hospital, and I would like to say I got to  know her quite well, but, well, that's a story for another post. She did show me affection in many ways, and probably as much as she showed affection for anyone, it was just that she came with her own story and background and was probably constrained in the feeling and showing of love because of that.
Anyway, the post today is more about her huge vegetable garden, which was really HUGE. It would have amazed you to think that such a small, thin, little old 'first wave' white émigré woman could ever have kept up with the area and grown quite so much as she did.  And I'm not even including the peaches and plum trees in her front garden.
I don't recall much of what she grew, not being old enough at 4 to be particularly interested, but I do remember the artichokes - huge thistles taller than me - which she told me in a rather off-hand way she didn't really know why she grew, as she didn't like to eat them herself but merely gave them away.
Behind the vast artichoke bed and growing against the back of the garage, was a vine covered with leaves shaped like hearts and the most flimsy, large, breath-takingly beautiful, purple-blue flowers.  I remember asking her if some part of them could be eaten and she snorted and said it was just a weed which she hated, and it was called convolvulous.  I later came to know it as Morning Glory, for its habit of opening its glorious flowers to the sun every morning.  It's also called bindweed elsewhere.
Unfortunately like many plants brought here to the mild climate in New Zealand, it really does far too well, and it rather a pest.
I still think it is one of the very best colours, however.
Here it is on one of our walks completely covering a wire fence. 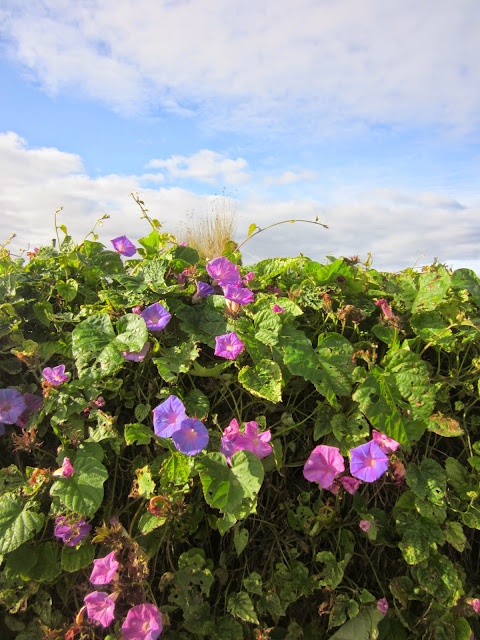 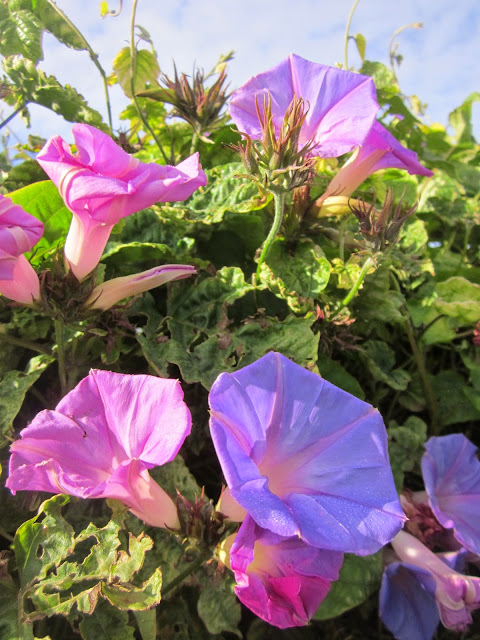 Maddie and I are just back from watching the sun rise while having a pleasant stroll on the beach.  Or in the case of Maddie, a sniff and a trot.
There were lots of different sponges and weeds and shells in the tideline, and a generous abundance of pieces of rounded pumice - the aerated, glassy, floating rock that almost certainly came from White island, New Zealand's most active volcano not far offshore. On one of these images you can see it with its plume of steam. Up until 1914 they mined sulphur off it, but in that year a lahar killed all 10 workers, so mining was sensibly given up.  These days you can have a guided tour but landing on  the island without permission is illegal, and also possibly foolish*. 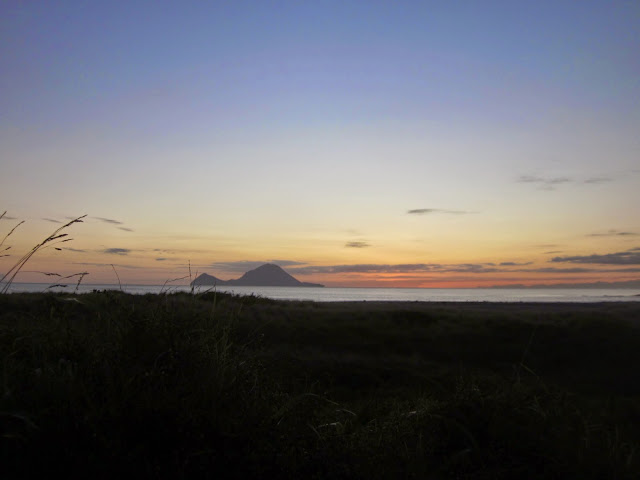 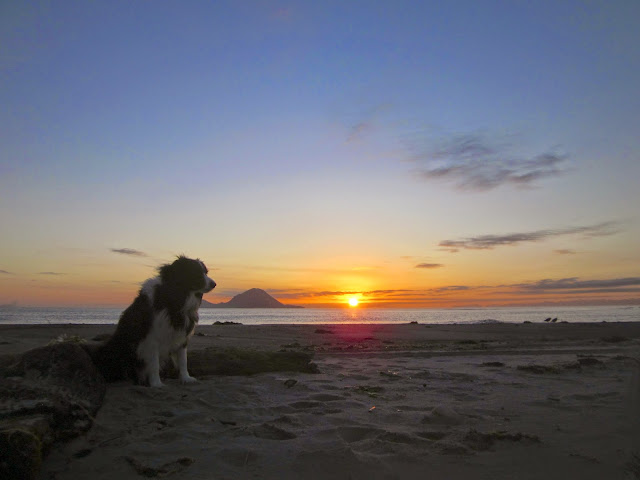 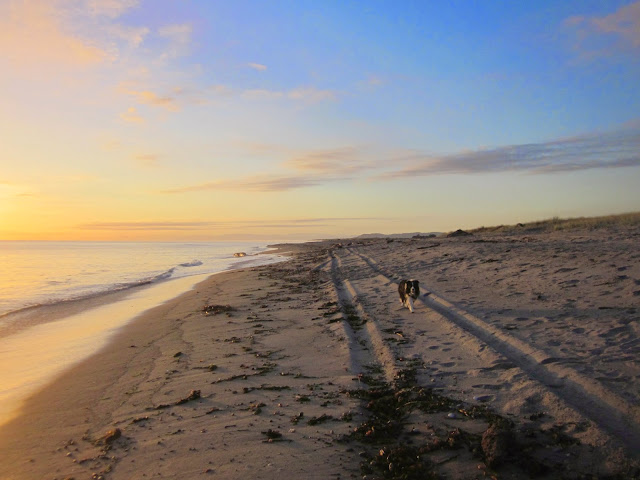 *Although exciting and very interesting, according to a member of my family.
9 comments:

Walking along the Race

'Races' is what NZ dairy (cow) farmers call farm tracks.  They are often carefully maintained and  feed to as many of the paddocks as possible, as the cows must walk along them four times a day on their way to and from milking.
The last two days the dogs and I have been taking our constitutional along the neighbour's races. 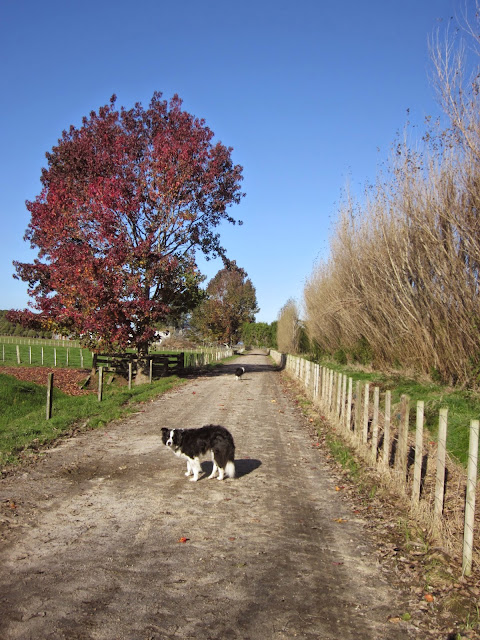 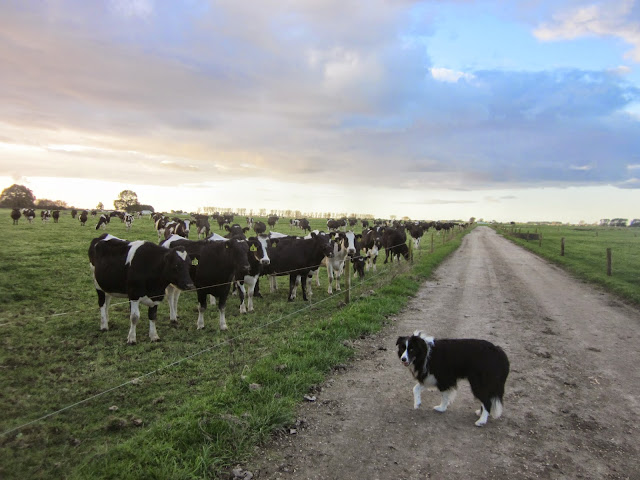 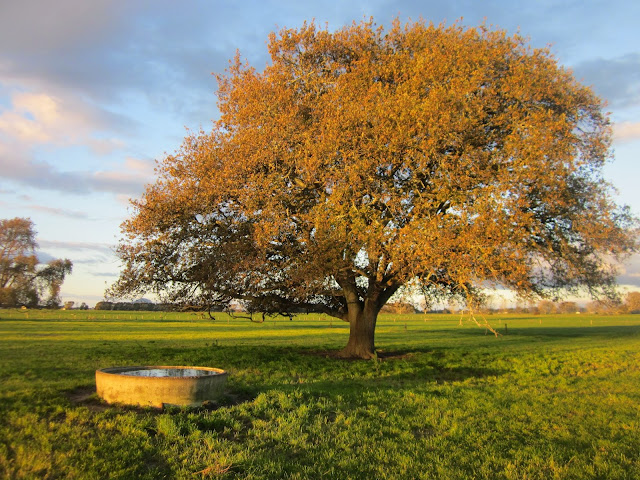 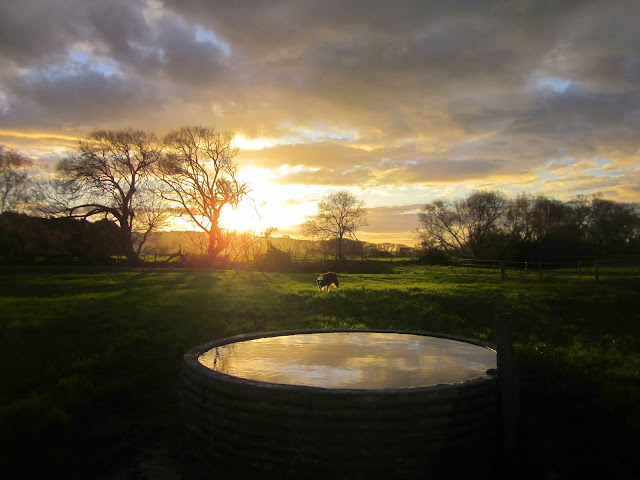 Two views, quite different, taken within one hundred steps of this farmhouse on the Rangitaiki (Rang-ee-tie-key) Plains on the Bay of Plenty (bay-of-plen-tee).

Why does it always seem more fun to do chores at someone else's place? 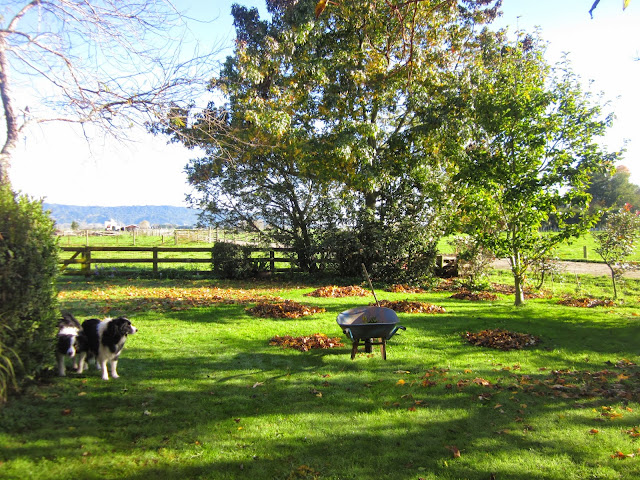 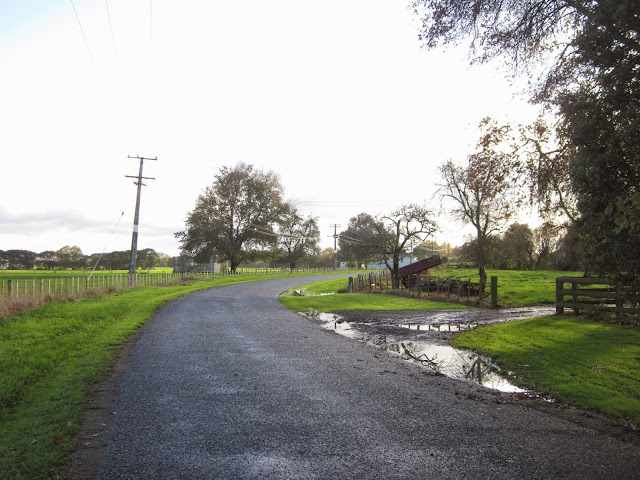 Yesterday there were floods in Wellington, a small tornado (which removed about a third of the roof off the stadium), and torrential rains in Tauranga.  Here, it persisted it down all night and this afternoon. But there was a convenient break at dawn to allow the dogs and I our usual walk.  Everything was freshly washed and clean, albeit rather soggy. 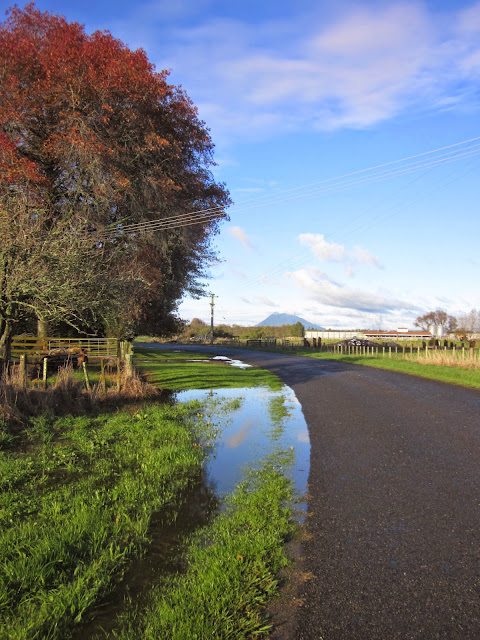 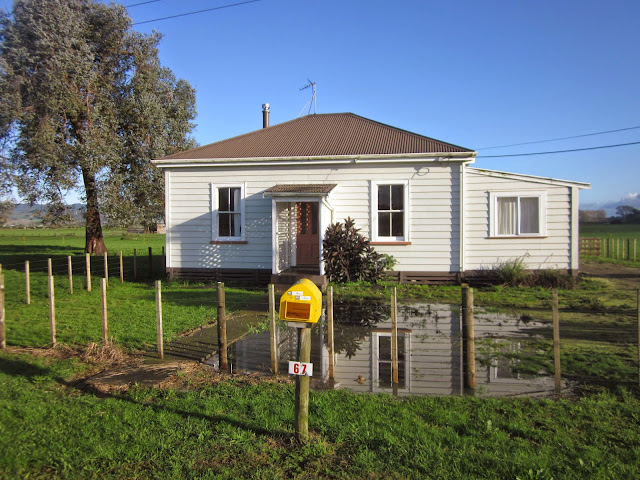 .
And one of the trees took advantage of the winds to divest itself of its last leaves. 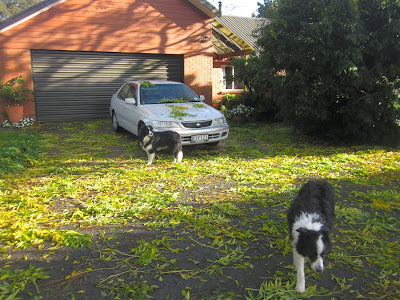 Due to an astonishing deluge of spam, comments for this post are now closed, sorry.  If you have something relevant to say about it,  please jot it on the next post.  - K.

It's getting cooler in the mornings.  I generally take Clyde and Maddie out for a walk at first light.  Today we were greeted by another world, even though we walked the same quiet, no-exit road. 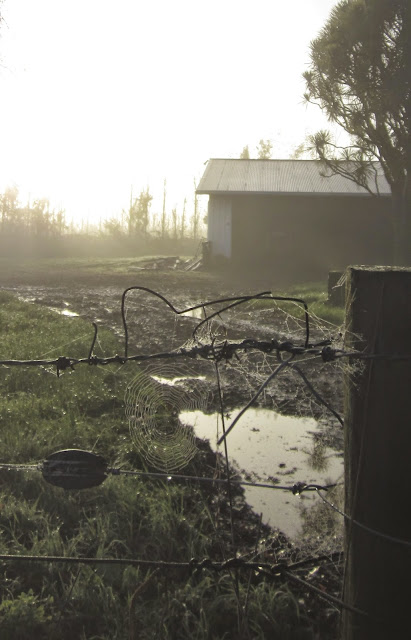 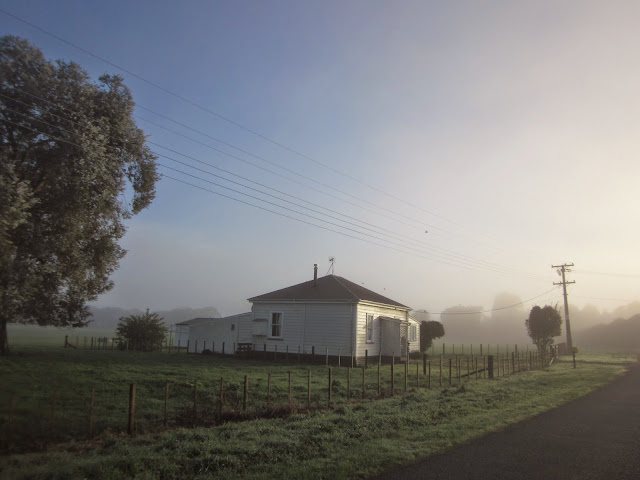 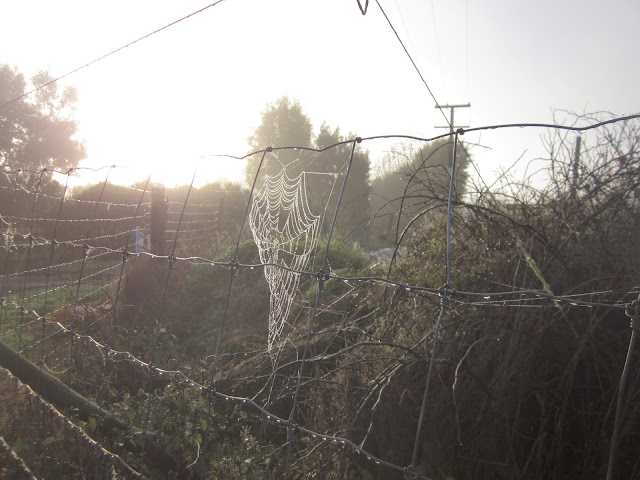 Once in a Blue Moon

Wow!  What a treat!  Just a short while ago I was doing the dishes. Directly outside the window there is a huge port wine magnolia, and sucking nectar from one of the tiny, sweet flowers, was the hugest, blackest butterfly I have never seen in my life before!
I grabbed my camera and luckily it had not fluttered too far and was sipping from a daphne by the front door. 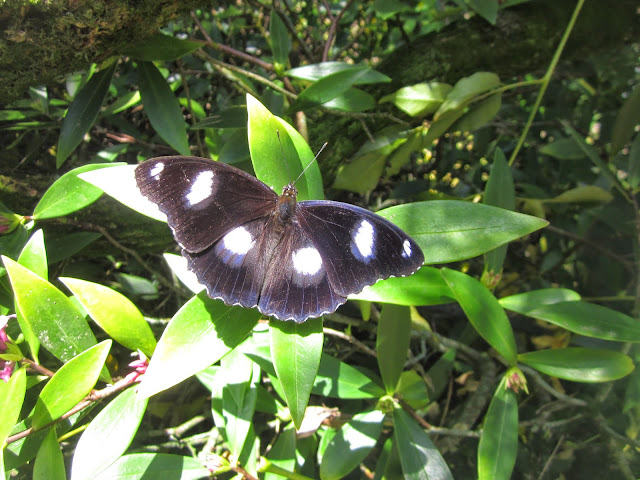 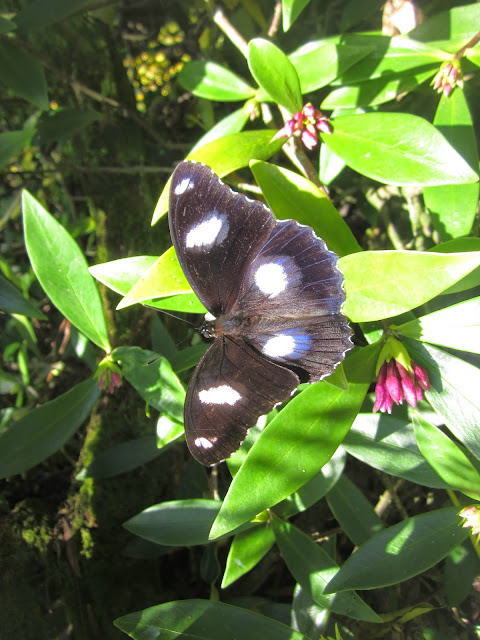 I took those two shots above and then, blow me down, I could hardly believe my eyes, because when the angle of its wings changed, the conspicuous white spots were suddenly ringed with the most gorgeous bright blue.  Heavenly! For a few seconds I thought it had somehow and magically disappeared and another butterfly had taken its place! You can tell by the abundance of exclamation marks that I haven't been so surprised and delighted in a long time.

Apparently it is a very occasional visitor to New Zealand from Australia, and probably doesn't breed here. It was a male Hypolimna bolina (nerina), called the Common Eggfly butterfly (what a pathetic name for such a beauty) in Aussie, and the Blue Moon butterfly here.
My day is made. 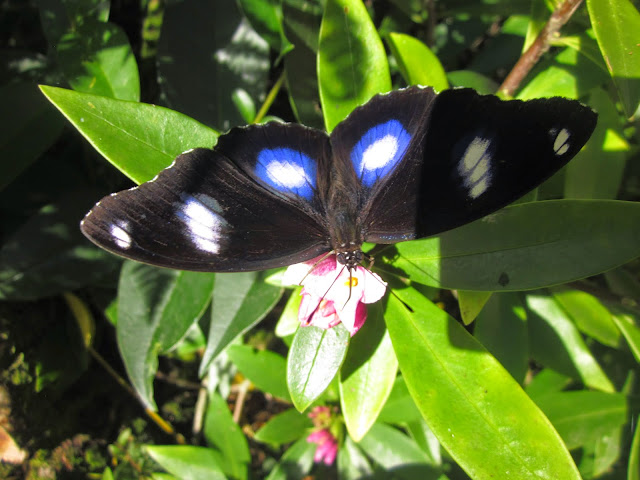 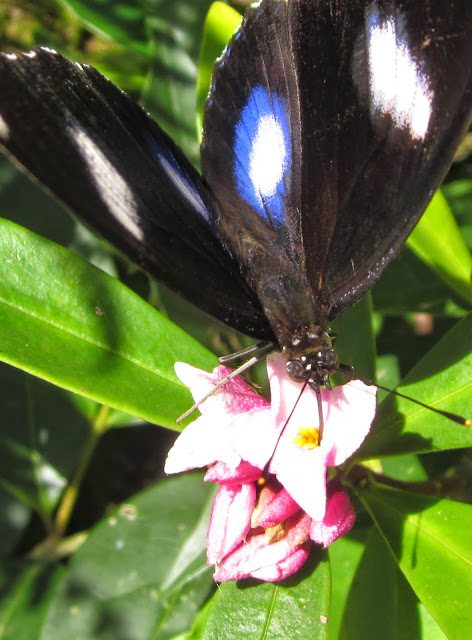 Around two and a half years ago, I spent a lovely 6 days in my home town Havelock North.

It was six days of nostalgia and re-living old memories.
It was the occasion of my old primary school Jubilee - the 150 year Jubilee!  This event rather suddenly seemed to appear on the horizon, and it was with a shock, me being still so young, that I remembered I danced in my special white turn-of-the-century pinny (that Mum sewed) on the grass of the playground, at the centenary.  Eeek.  Fifty years before.

And although we have caught up regularly in the intervening years, and since, it was also the longest time for about forty years that I had spent in the company of one of my particular school friends - Wendy. 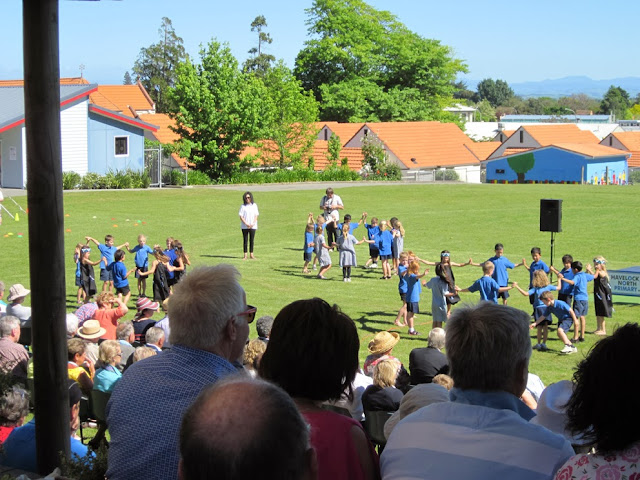 The staffroom is on the left and to the right my first two classrooms.  Miss Mills was my first teacher.  I sat next to Richard H.  One day at the end of the year I spotted a whole lot of scarlet crayons IN HIS DESK (We were expected to return them to the bucket when we had used them).  Crimson is nice, but scarlet was my absolute favourite and I had always wondered where they were...

At the Service on Sunday morning:

When we were eleven, Roger Stevenson was our choirmaster too.  We were his first choir.  We made beautiful music together.
Well, we thought it was, but he went on to make even more beautiful music in his (ongoing) career, which has included musical director of the New Zealand Secondary Students Choir.


Our school banner used to read 'He Carries His Cross Bravely' which is probably not so relevant these days.  The school logo is a stylised hot air balloon now. 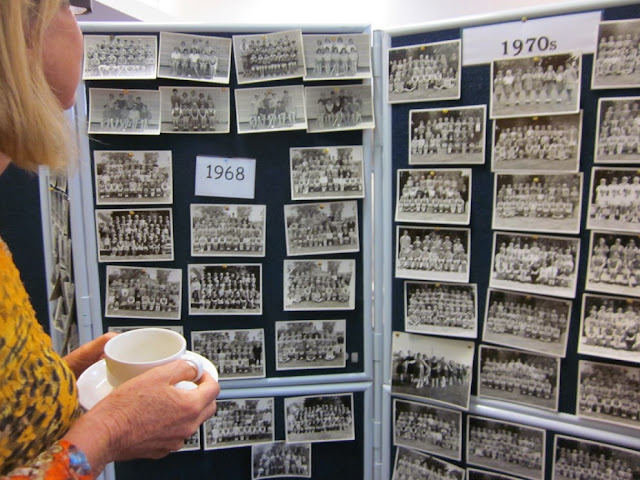