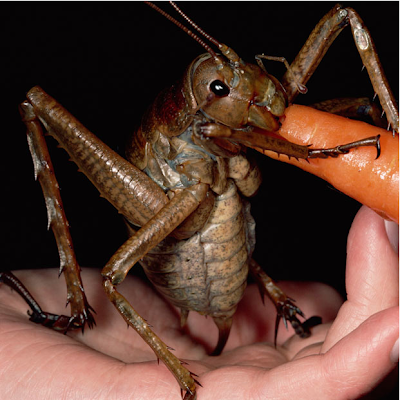 The UK telegraph recently starred the astonishing New Zealand Giant weta (in Maori: wetapunga - 'God of ugly things') as its picture of the day.
The article (you can read it at the link above) is a little misleading however, as it gives the impression that an American entomologist discovered this insect:
'Adventurer' Mark Moffett has found the world's biggest insect...after two days of searching...on Little Barrier Island'.
In fact this island has long been known as one of the last outposts of the giant weta.
For me, the interesting thing is that wetapunga has been able to survive alongside the small polynesian rat kiore, which was brought to New Zealand when the Maori first came. Although kiore eats the nymphs, the adult weta are too large and also find safety in their tree-top habitats. However neither species has been able to hold out against the European rats of mainland New Zealand, and so share the Little Barrier, from which the European rats have been eradicated.
It should also be mentioned that carrots are not generally on the menu for wetapunga. Your veggie gardens are safe.