The Whio. Painting for Charity


The Breast Cancer Research Charity auction is on again this year in Tauranga.
I decided to paint the New Zealand Whio (Hymenolaimus malacorhynchos), also called the Whistling Duck or Blue Duck.  Apart from the fact there are only a few thousand left in the world (what a precious creature!), I thought they would be a good metaphor for the challenges people face when they receive a diagnosis of breast cancer.
Mostly because the Whio lives in particularly challenging environments. Strong currents and very turbulent waters. They have an odd-shaped bill that has softish side-pieces that are adapted to scraping the algae and tiny organisms that cling to the water-sides of rocks. They also have singularly remarkable bright yellow eyes, and attractive russet speckles on their chest. 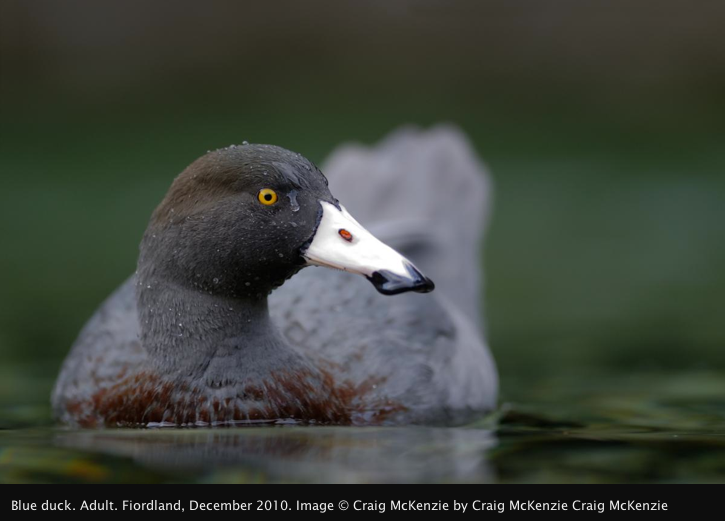 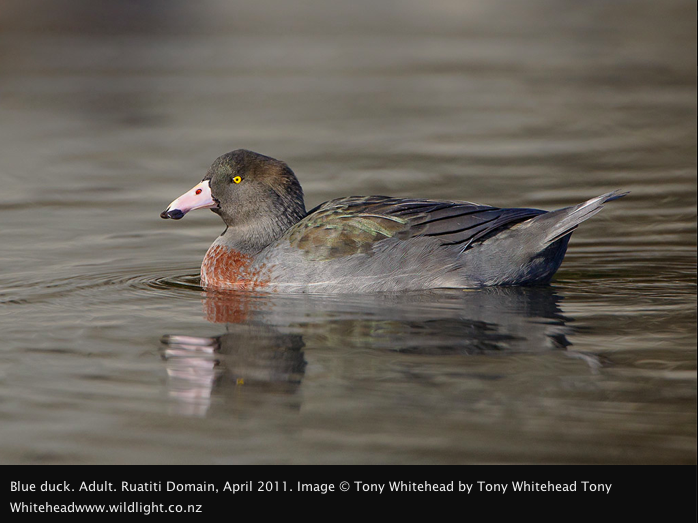 The male is the whistler, the female makes a rasping sound like a fingernail run over corrugated cardboard. You can get in the mood for the following sequence of painting images by listening here if you want to.  They are hard to find, and I've never actually seen one, so I approached two well-known New Zealand photographers for reference images.  Both were kind enough to allow me to use their images for the project for free and I'm indebted to them.  I think if you had a moment to click on their respective links, you'd be amazed at the class and clarity of their beautiful images.
Neil Fitzgerald Photography
Tomas Sobek Photography

Okay, off we go a-painting-o.
1. About ten coats of white gesso on a small square stretched canvas.  Then it took me hours to find just the right duck image and a rough yet pristine New Zealand water/ forest image that would go together.  For example, just one consideration was the light direction.  In the end I flipped a duck image horizontally so the light would fall from the right of the picture. 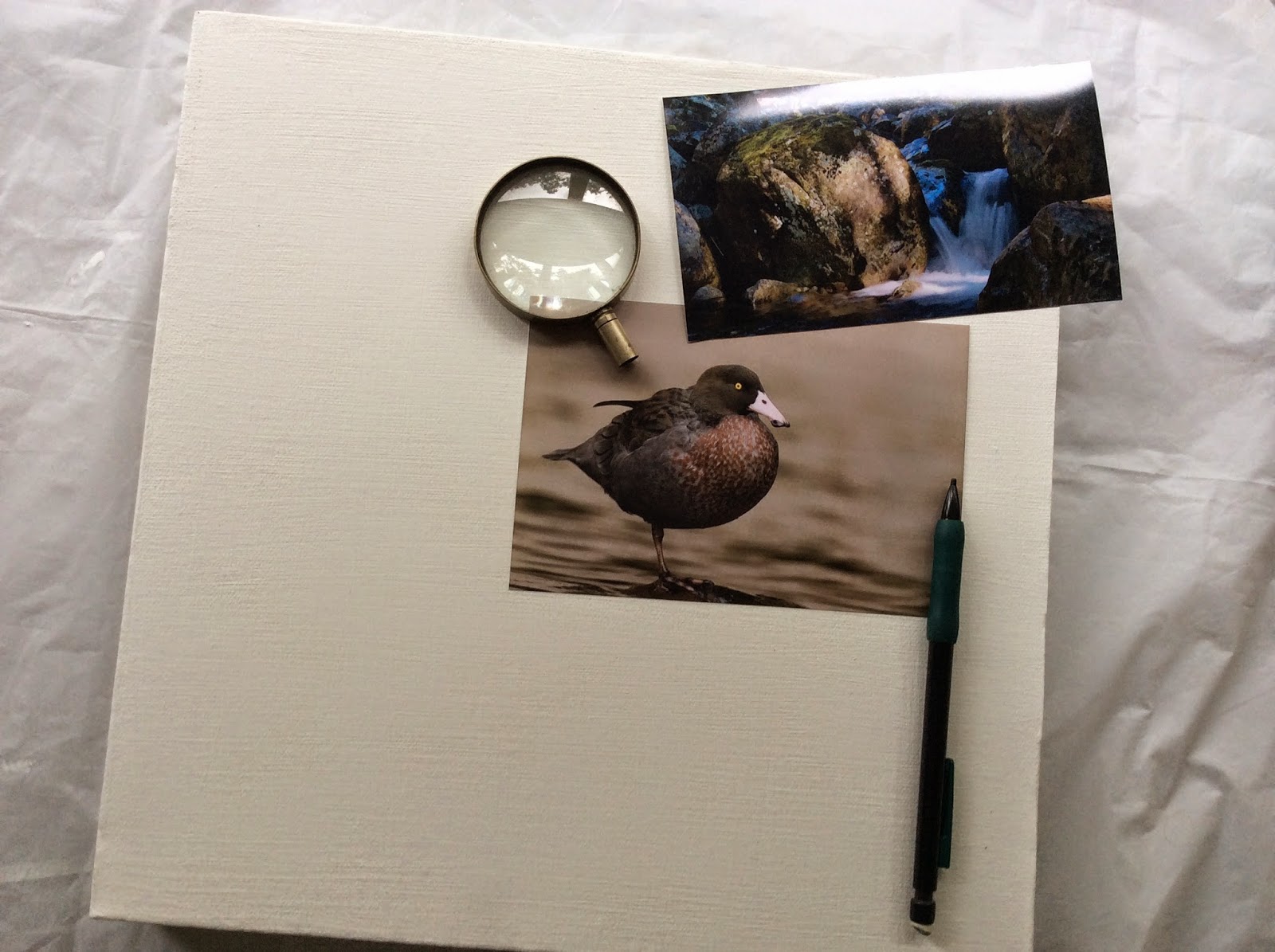 2. Pencil drawing directly onto the canvas.  I have my two reference photos, and my magnifying glass handy.  I already played with the size of the duck and various positions for it in photoshop.  I decided to place it in the lower left, away from the centre of the painting, and almost 'hiding' against a big rock, as I want it to be less important than the rushing water/ challenge metaphor.  I want it to be seen second. 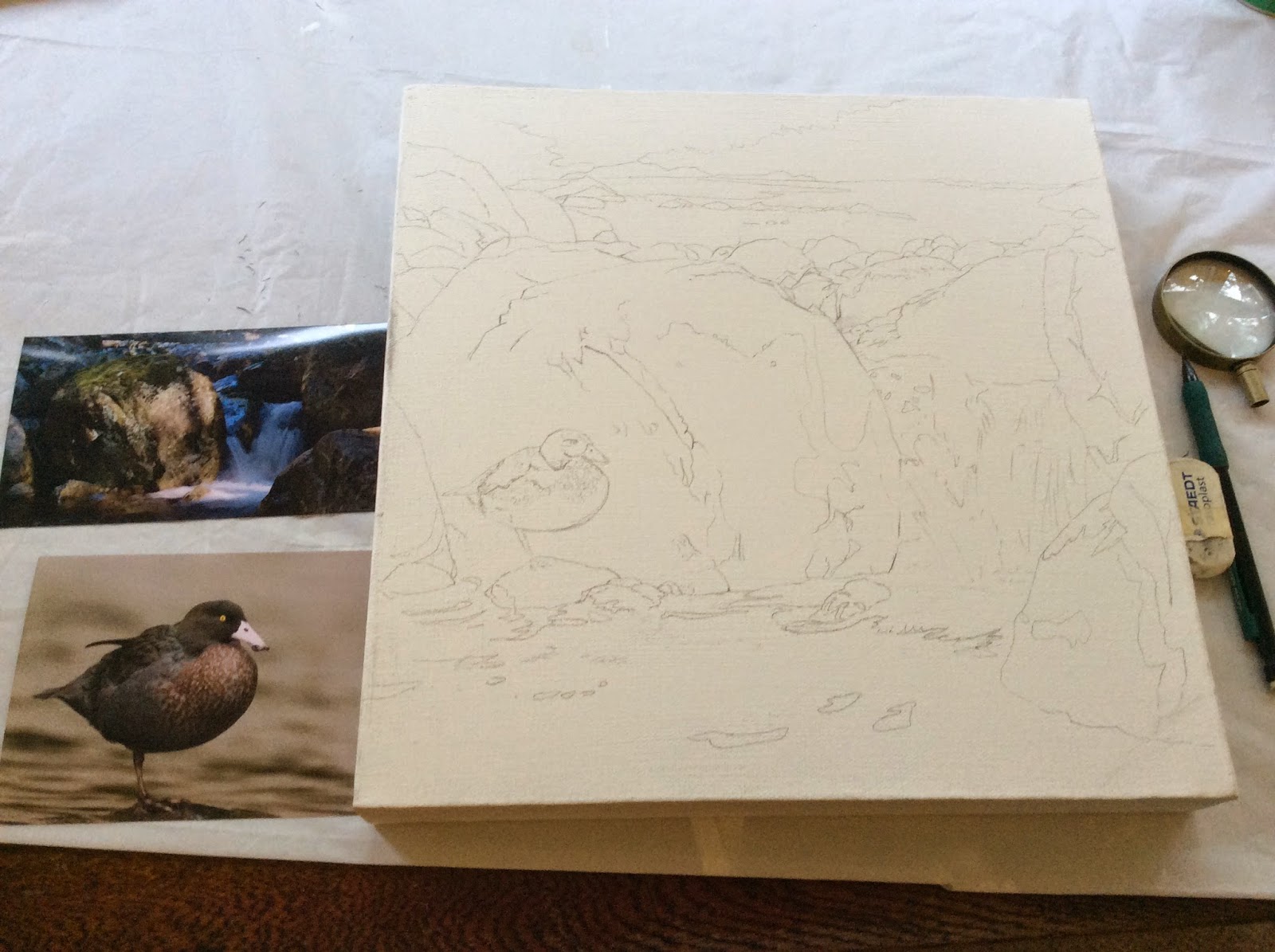 3. Washy undercoats of acrylic.  I am using only three main colours:  red oxide, ultramarine blue, and yellow ochre.  They form my main red, blue and yellow 'primaries'.  All other colours should be able to be made from mixtures of them.  However I rapidly find the green they make is not bright enough so I also find a tube of Sap Green to liven things up for the foliage in the far background and also the mosses that glow in the sunshiny spots.  With plenty of added blue, the red oxide turns into rich 'blacks', and a speck of this plus Ochre, creates all the greens I need with added Sap Green.  I want the Red Oxide to glow through and add interest in the shadowy sides of the rocks. 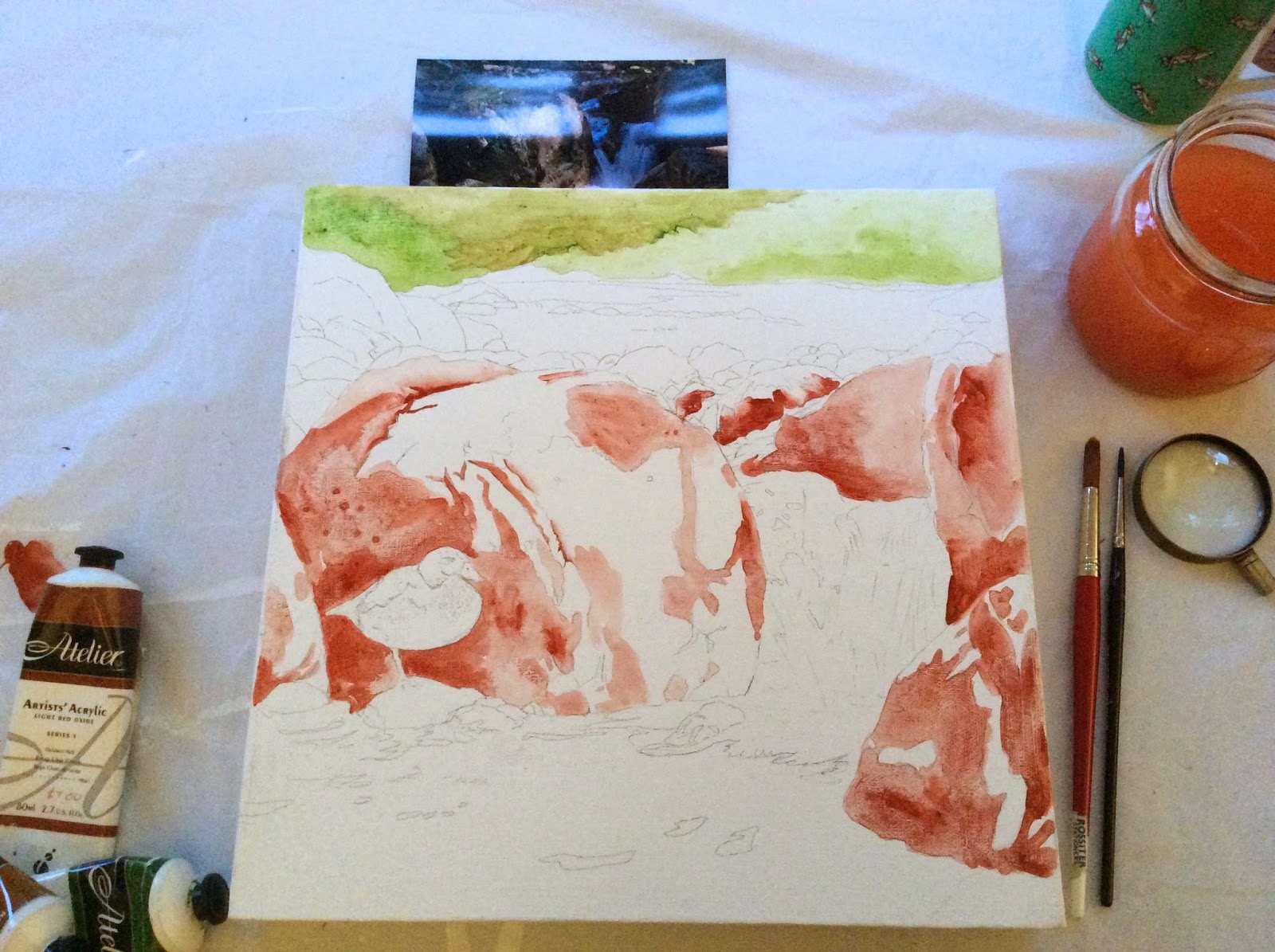 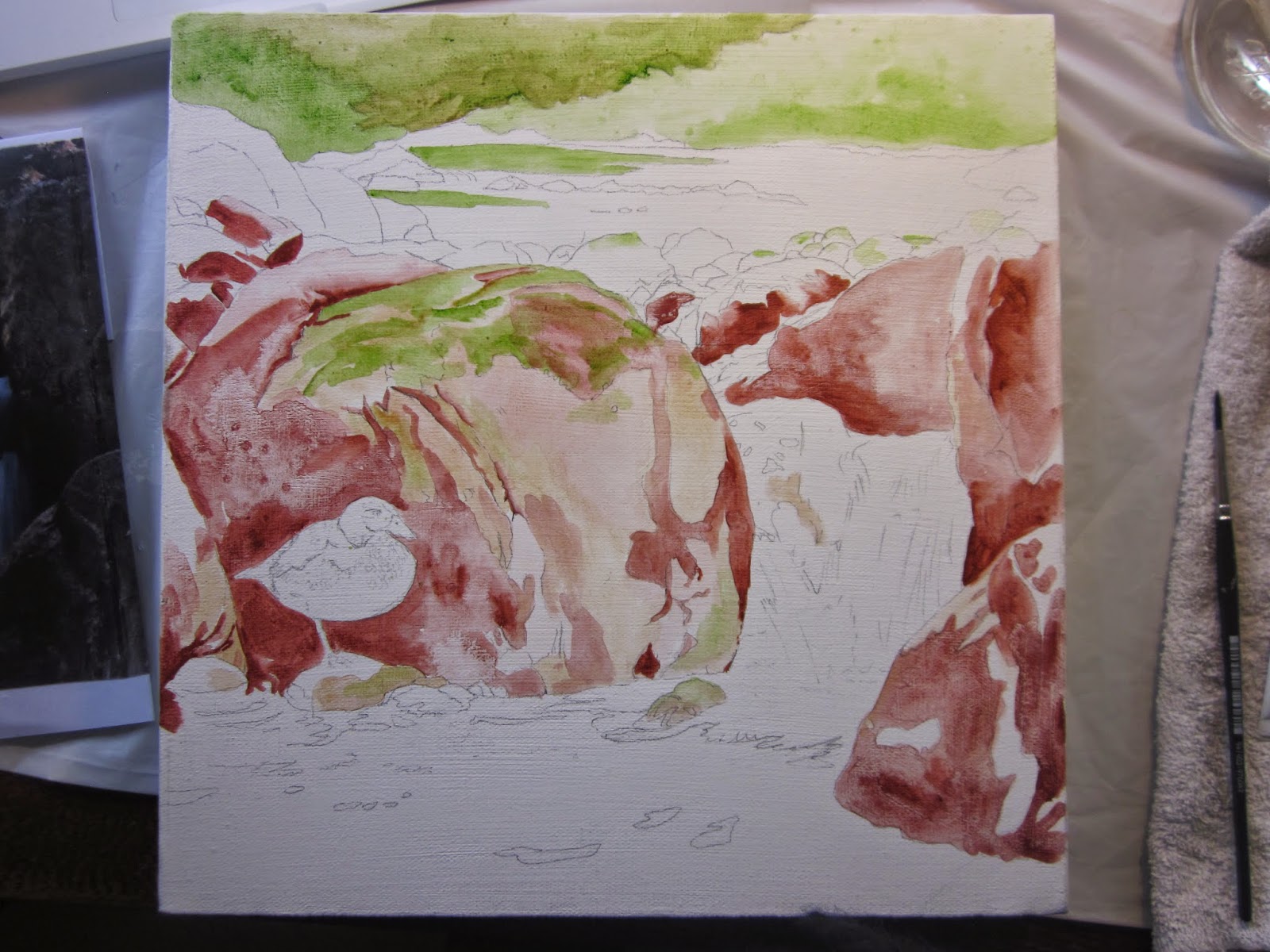 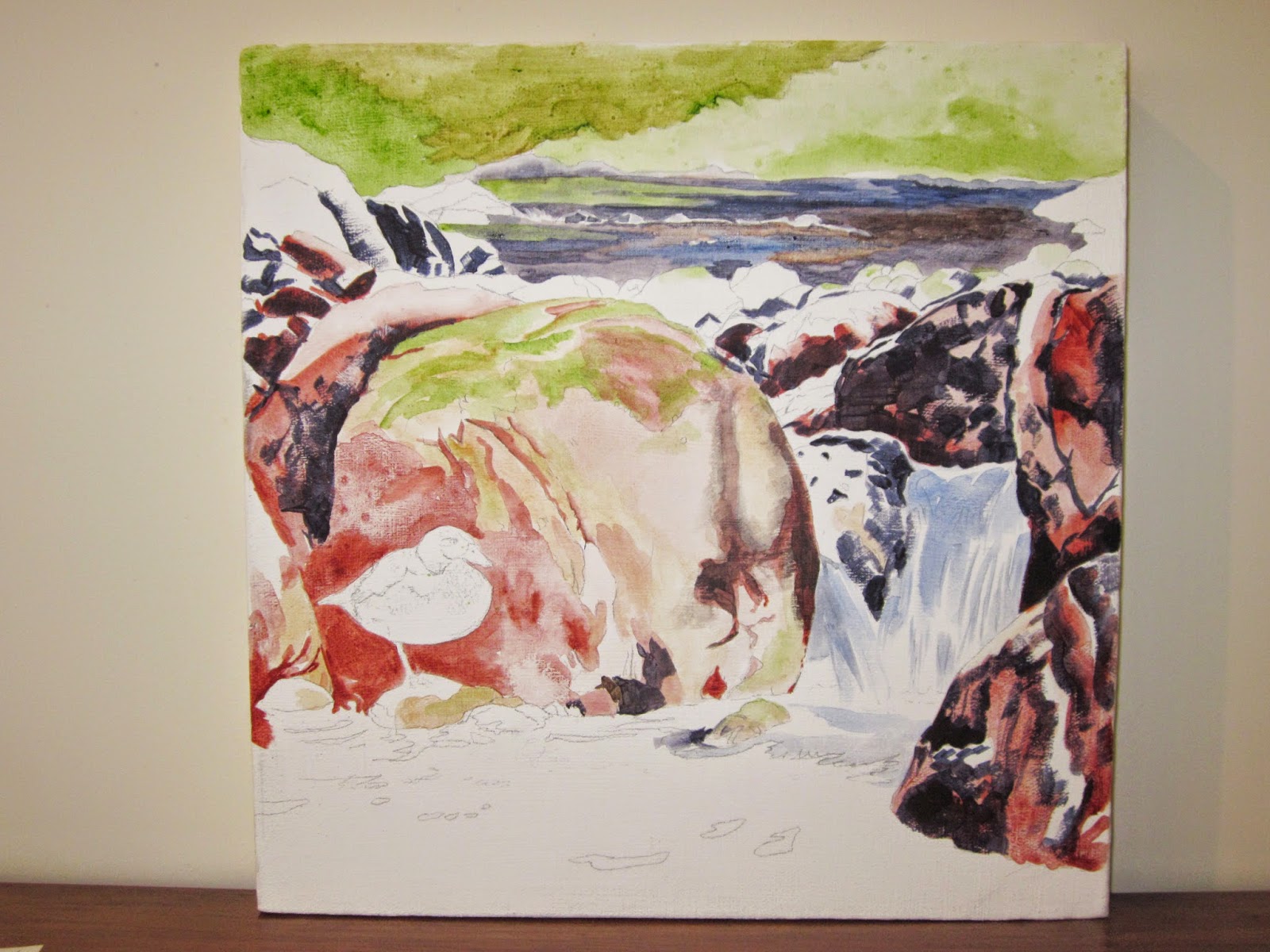 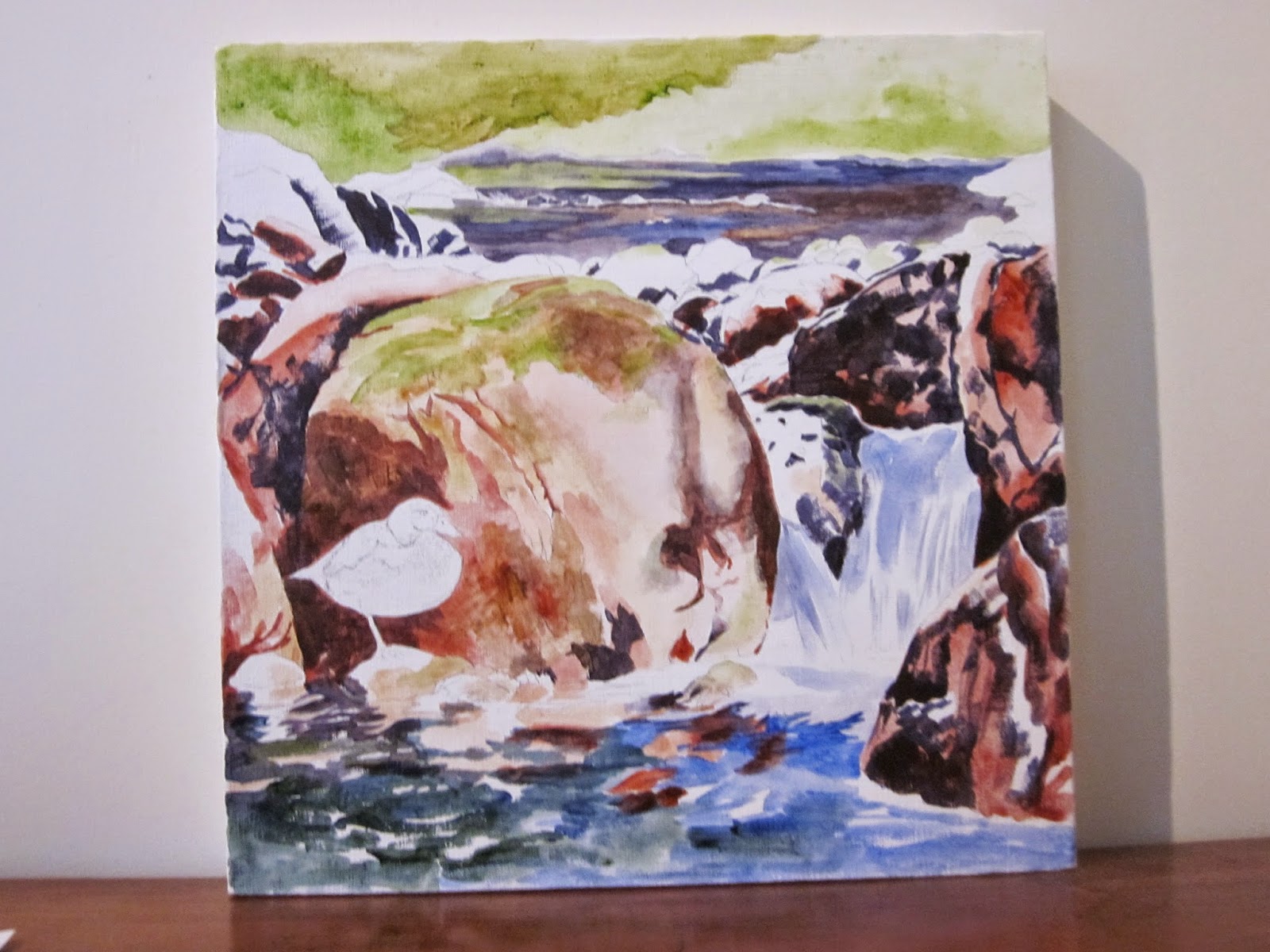 4.  I get nervous at this stage.  What if I muck up the duck?  Better not to do too much background in case it's all a waste of time because the star of the show is a mess.  So, time to paint the Whio.  I use lots of extender medium and build up the colours in layer after layer.


The yellow eye needs the tiniest brush and a minute dab of yellow straight from the tube.  The black pupil is felt pen.  It needed to be perfectly round.

5.  The rest of the next week (!) I worked away at the water, the stones and the waterfall, developing detail, adjusting colours and contrasts, constantly referring back to the source images, yet at times simplifying or making up things as the composition required.  For instance, the image only went to just above the big round rock.  So I made up a series of pools and rapids above it and guessed what colours would be reflected in the water.
Also, I wanted the right hand side, including the waterfall, to stop competing for attention, so put a lot of careful darks and shadows there.
I also developed some 'lines' and shapes that would repeat or guide, to try and give the composition structure, movement, harmony and balance.  For example, I reduced the detail on the big round rock so the eye would wander and 'discover' the Whio hiding in its shadow side.

6. Finishing off. It's important not to rush this stage.  I leave the painting propped up in the lounge and 'startle' it in the mornings when my eyes are fresh.  It seems very busy with too much contrast.  I reduce the reds and greens with blue, and worry for a few days. 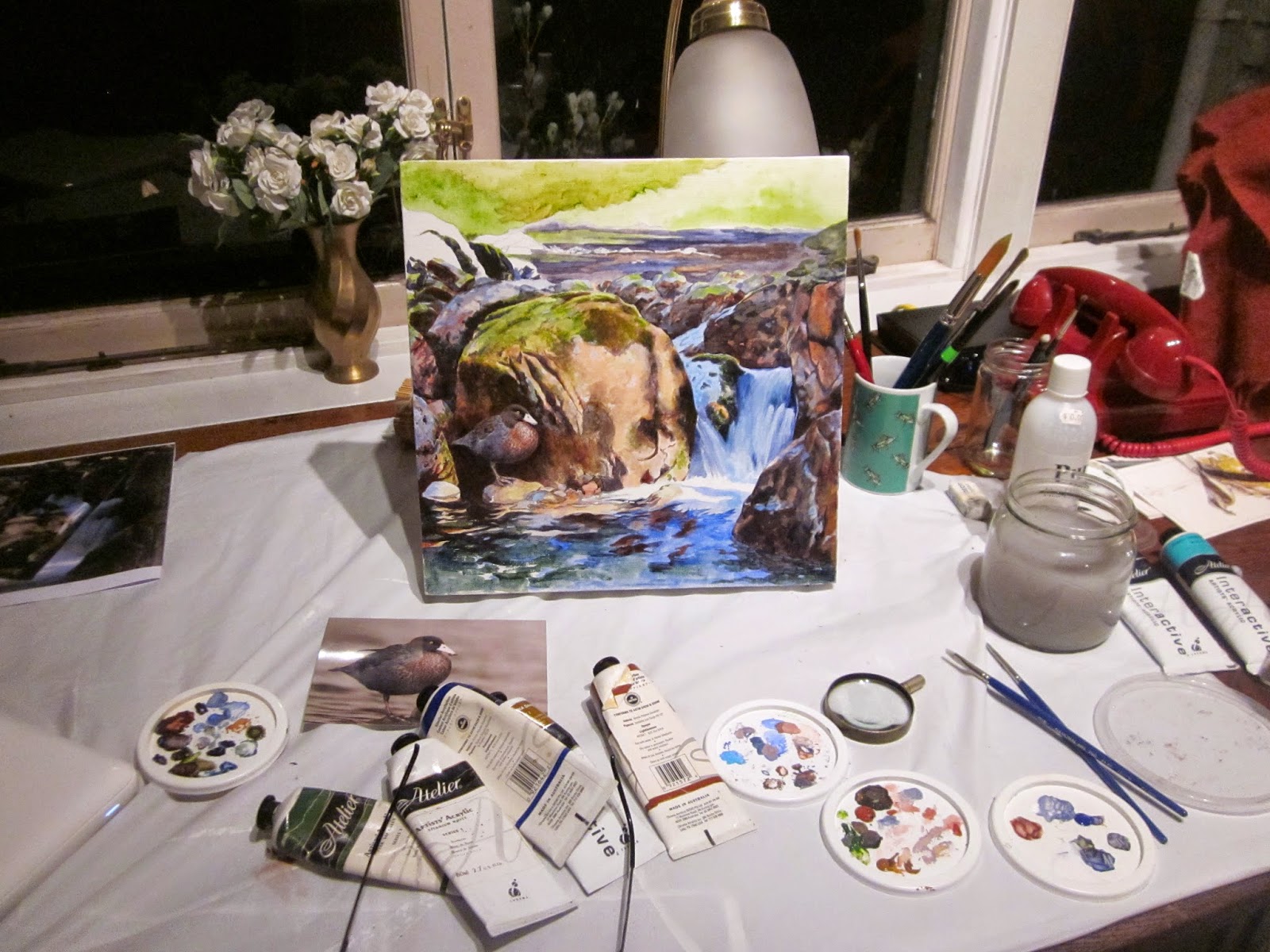 7. I colour the pale rock at the bottom left, and the left hand rocks, complete and texture the forest at the back, and darken further the busy rock shadows on the right. It's starting to look nearly finished.
I fluff around trying to sign my name in a good place, change my mind three times, wipe it off, re-do it. I always struggle with the signature.  Maybe next time I'll follow the recent trend and sign the edge and avoid the problem altogether…
Paint the edges black.  Suddenly it looks good.  I'm becoming really happy with it.


8.  Done and dusted. My screen shows the water much brighter blue than in reality.
You can see the size in this first image. 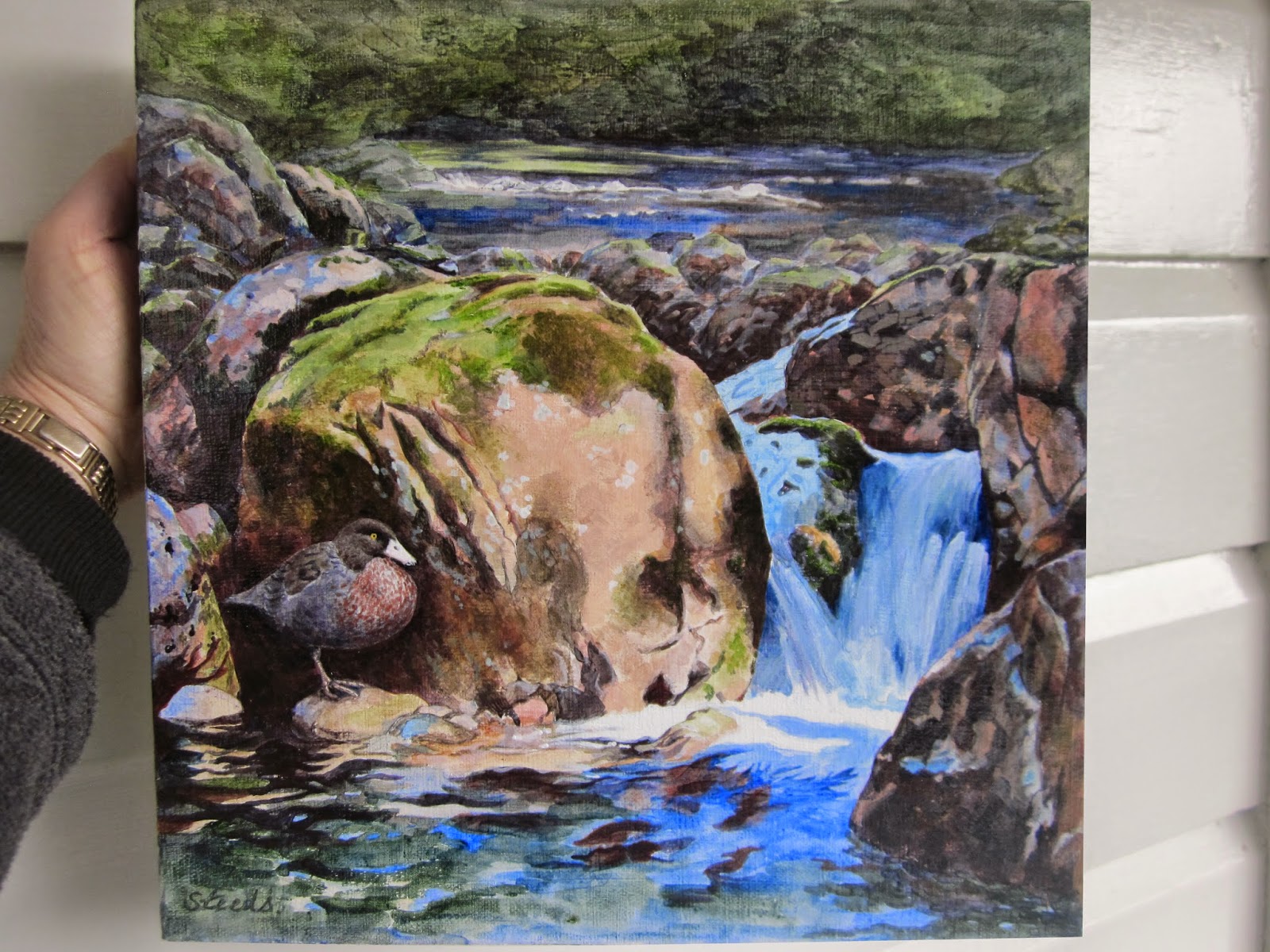 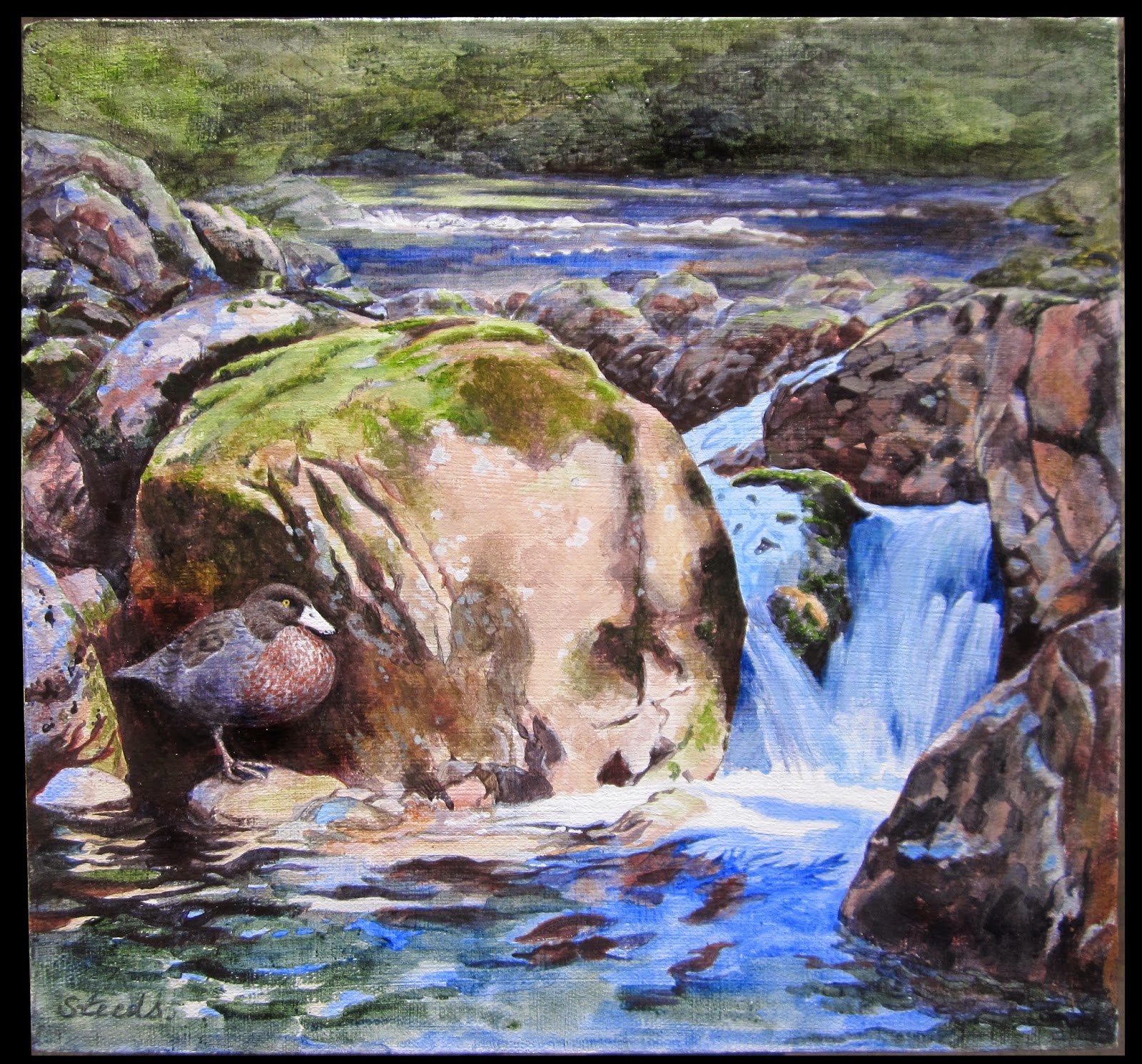