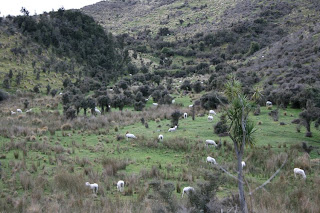 Marvelous manuka honey.
Let me start this post by explaining that I consider myself a pragmatist, and a Science/ Geography-based artist.  Capital S, capital G and small a.
eg Vitamins and astronomy - yes; homeopathy and the existence of a deity - maybe; crystals and astrology - no.
All honey reflects the characteristics of the nectar source.  Clover honey, with which we are most familiar, is hard, white and mild.  In New Zealand we have many native plant sources that can provide distinctive honeys.  For example, I love to use the strong, sharp rewarewa honey in my home-made museli, but it's too strong on toast for most people.  Recently a number of people were admitted to hospital after eating honey that was made from nectar from the poisonous tutu flowers.
Some 17 years ago I was fascinated to hear of research being carried out in New Zealand on the medical benefits of honey, specifically manuka honey. At the time, I mentioned it to my Mum and she said that before and even after the discovery of antibiotics, nurses like her were using honey in hospitals for wounds.
I should mention that all honey produces peroxide gas when applied to wounds.  This is very good at killing infection, reducing swelling and aiding healing, and has been used for at least two thousand years.
But New Zealand manuka (Leptospermum scoparium) honey has been found to also contain at least one other substance that adds to this effectiveness.
Now, after clinical trials and world publicity, it has been proven that a wide range of bacteria, including the hospital nasties like Streptobacillus species, Staphylococcus aureus and Clostridium species (that can cause gangrene) are killed by manuka honey.  And, what's more, at low concentrations, ie even when it is diluted by lymph.  Helicobacter pylori, associated with gastric ulcers, is also effectively treated by manuka honey (just have a teaspoon before beginning each meal).
Conveniently, honey, applied under dressings which need to be changed no more often than eight hourly, prevents wounds from drying out and sticking to the dressing, and the method of honey's antibacterial action can never lead to bacterial resistance, a problem with modern antibiotics.
I can also highly recommend treating eye infections or minor scratches (skin or eyes) with manuka honey.  Great for pets too.
Dr Peter Molan of the University of Waikato has discovered that although there is some variation in efficiency between one batch of manuka honey and another, heating the honey does not affect its antibacterial properties.
But there is another, fascinating aspect of the story.  The extra substances I mentioned, that make manuka honey especially effective over other honeys, have not all been identified yet. But it is possible that they have an unusual source.
You see, manuka shrubs were considered a bit of a nuisance when the first settlers came to NZ and wanted to clear the native cover off the land and replace it with pasture and crops.  A scale insect was imported from Australia and it spread quickly through NZ, and even now, all but very young manuka shrubs have the insect sucking away on stems and trunks.  Now, the insect secretes a sticky sweet honeydew, much like aphids, and this dew in turn is harvested by wasps and bees.  However it also encourages the growth of a black sooty mold (which gives manuka a characteristic fire-burnt look - you can see this in my photo which I took on the south Island road between Waiau and the coast).  I suspect that the bees cannot help but pick up some mold when they collect honeydew and nectar from manuka, and maybe this is the source of the special antibacterial factors in manuka honey.
If you want to read about all the clinical trials and research you can go here  and click on the "Manuka Honey as a Medicine" pdf file.
Of course, you can always just enjoy it on toast!
Added 14 October: Update soon.  See here.