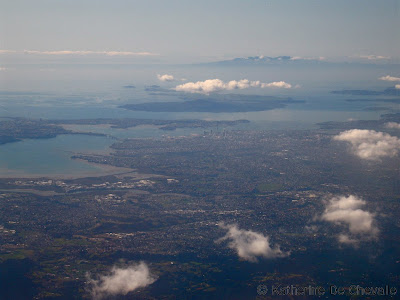 People coming to New Zealand from overseas generally arrive first in Auckland.
This is a large, sprawling city containing 1.3 million, which is about a third of New Zealand's population.
If the weather is clear, you may catch a glimpse of a few landmarks as you come in. If you enlarge this image (click on it) you'll see three of the more important ones. Rangitoto Island, (the volcanic cone under the cloud just offshore) the Sky Tower and the Harbour Bridge. Aucklanders love compliments about these three things.
Here are some things to say that will endear you to Aucklanders on your arrival.*
1. Oh my, isn't Rangitoto beautiful! (Rang-ee-tow-tow)
2. Gosh, that Sky Tower - it's so tall! Sydney's is nowhere near as tall!
3. Gosh the bridge is wonderful! I much prefer it to Sydney's.
You may also mention how fabulous you have heard the Rugby World Cup facilities are going to be. This will be a good move, for you'll get a long expansive monologue detailing it all, during which you'll be able to relax, close your eyes for a while and recover a little from your jet-lag.
Do not, under any circumstances mention South Auckland.
*Do not bother saying them to New Zealanders from any other part of New Zealand. They will be taken as an insult. Aucklanders are from a different New Zealand.