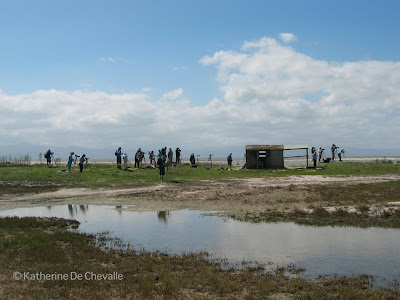 Here, for you reading pleasure, and rather lazily just reproduced by me, is a recent article about the Godwits that appeared in my local paper the Bay of Plenty Times.

Every year about 20,0000 people visit Miranda, on the Firth of Thames, to watch and photograph shorebirds, and interest continues to grow, said Keith Woodley.

That level of interest was probably not anticipated back in the 1970s when Auckland Ornithological Society members decided to establish a centre for birdwatchers at Miranda.

Among those who founded the Miranda Naturalists Trust in 1975 were Richard Sibson Sylvia Reed and Beth Brown.

"They were regular visitors to the Firth of Thames and wanted a place to stay while they studied birds. They based the Miranda Trust on the British Norfolk Naturalists Trust," said Keith.

What brought the birdwatchers, and indeed the birds, to Miranda were the extensive tidal flats and saltmarsh bordered by a rare shellbank chenier plain. Over time this has become world-renowned as an accessible site for migratory birds such as the godwit and endemic waders.

"It is also sometimes visited by rare birds like the red-necked Phalarope, seen here in December 1996. It is one of the few waders which are also adapted to swimming and when it appeared, created a good deal of excitement among birdwatchers," said Keith.

The attractive building has a shop selling souvenirs and one of the best collections of bird books in the country. It also has a conference room as well as the accommodation areas.

The trust hosts school groups and provides seminars and information on birds and birdwatching. Keith said plans are in place for a $1 million upgrade of the complex to meet the growing demand from the public, schools and tour groups.

The centre no longer attracts just committed birdwatchers, but people keen to see flocks of birds in numbers not possible elsewhere, and especially the godwit and wrybill, which feature on the trust's promotional material.

Keith said both birds were vulnerable to man-made environmental impacts and even though the mudflats and shell banks at Miranda continued to attract shore birds in significant numbers, siltation was a major concern.

The Firth of Thames receives an estimated 150,000 tonnes of silt each year from the Waihou River alone and much comes from farms.

While initiatives are under way at local-body levels and within the farming community to alleviate some of the erosion problems along the river, Keith said river modification through stop banks and draining of wetland in modern times and dating back to early European colonisation continued to have an impact on the Firth of Thames.

The Miranda trust works to increase public understanding of the importance of the birds which visit Miranda each year and how vital it is that their feeding grounds are retained.

Among the "stars" to have helped heightened that understanding is Miranda godwit E7. She attracted national and international attention when satellite tracking recorded her amazing 11,680km non-stop flight from Alaska to Miranda in eight and a half days (204 hours), at an average speed of 56.7km/h.

Keith, who has written about the birds in his book, Godwits: Long-haul champions, was there when E7 and seven other Miranda godwits were fitted with the satellite transmitters, the data from which was to provide conclusive evidence of the small birds' amazing navigation skills and endurance.

The research also reinforced how vital to the birds' survival the stop-overs were along their "flyway". Godwits and other migratory birds use specific places as resting and "refuelling" stops on their journeys.

It is for that reason Miranda Trust has formed close links with Yalu Jiang reserve, in China, where godwits stop on their way north.

Keith has been to Yalu Jiang several times and says while people live on the reserve and make a living from fishing in the Yellow Sea, they can, with careful environmental management, co-exist with the birds.

Keith is equally enthusiastic about the wrybill, the only bird in the world with a bill which bends sideways. A New Zealand native, it nests in the braided rivers of the Canterbury Plains which are now potentially under threat from proposed intensive farming.

"We are keeping a watching brief on water right applications in the plains. The wrybill population is around 5300 and 40 per cent of them fly north to Miranda after breeding."

The Miranda Shorebird Centre is located on the Firth of Thames, one hour southeast of Auckland and half an hour west of the Coromandel. The centre is open daily between 9am and 5pm and the best time to view shore birds is several hours either side of high tide.