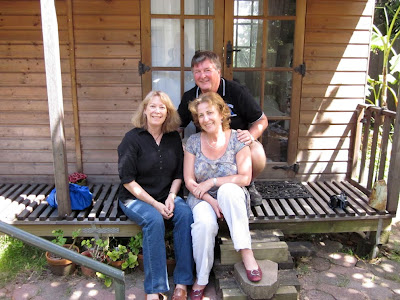 I'm feeling pretty chuffed. Yesterday I finally got around to making a step for my studio.
When YP and Shirley came to visit it was still the sad make-shift arrangement it's been since the studio went up, but it's now a quite reasonable looking serviceable step, and I Did It Myself!
First I went online and watched a video which nearly made me give up before I'd even started. The demonstrator guy with all the gear, made a totally amazing set of professional steps. It took him the better part of 4 hours.
But at least I learn the words for the parts of stairs.
There's the riser which is the bit your toe might touch, the tread, which, predictably, you tread upon, and the stringer which is the zigzag strip of timber on the sides that holds the steps up.
(For some reason at this point I thought I'd need three steps...)
And knowing the names I could then phone the local hardware store and get a price for the trickiest bit to make - a pair of three-step stringers. *Gasp* $95!
Right. There must be a cheaper way.
Thinking about it carefully, I realised I didn't need three steps, as the deck itself would be the top one. And in fact I didn't even need two, because the height was not too much that I couldn't just climb it in two stages. So actually, one step was all that was required. And I didn't need a riser. Enclosing in the backs of the steps would just make a trap for wind-blown bits and pieces.
I got a chunk of old wood that was left over from something, and cut it in half.
Then I sawed triangles off the bottoms at an angle so they would sit on the pavers, and also off the tops so they would lean nicely against the edge of my little deck....
Then I nailed two of the triangles back on half way up so they would take the treads, using some nails left over from erecting the studio. Hey presto, a couple of stringers!
I placed the stringers apart (at a space that looked about right), and nailed them onto the deck-support. 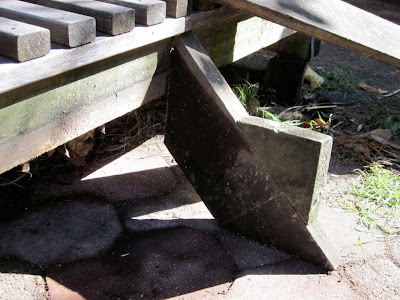 The bottom of the stringer can just rest on the cobbles. It will deteriorate eventually, but should take a while if the timber is tantalized.
Then I laid a bit of timber (saved from my old fence) on top and marked straight lines using the saw edge. It has a bump that is 90º - very convenient. 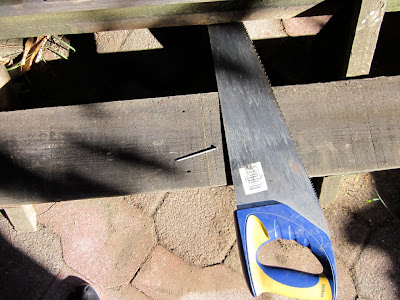 You can mark your lines using a nail.
Then I sawed the tread to the right size... 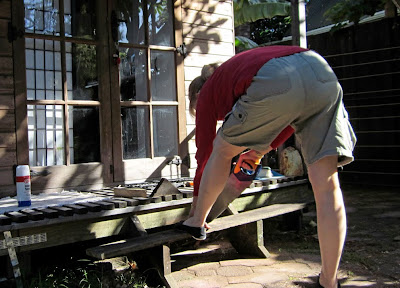 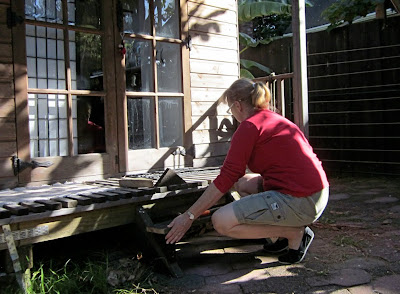 ... and it was done!
Time taken: about an hour. Cost: zero dollars. 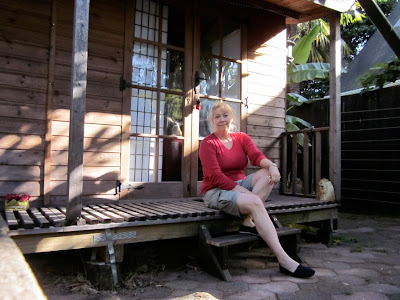