A Most Unusual Occurrence

When we lived over in the lush, green, inland valley of the Waikato, many winter nights and mornings were filled with the ephemeral white swirls of mists and fog.
Once I decided to have a hot swim at a spa near Matamata after work.  By the time I emerged the fog had come down, and was so thick it took me two hours to travel the twenty-minute journey home in the car.  An unsettling experience in which I hugged the side of the road, and the only way I made it was to crawl up a number of household drives and back out again.

In the last eighteen years since we have been living here in the Bay of Plenty, a mere 2.7 km (1.7 miles) from the sea, I can recall only two other times when we haven't have crystal-clear air.  Any clear night the only thing stopping us seeing the full array of stars is the streetlights.

It wasn't until the sea fog rolled in last evening that I remembered how much fog can completely change the appearance of the environment.  Looking down the drive, there was no road to be seen, the traffic sounds were muted, and of course the inversion layer had trapped all the city's household chimney smoke which was adding to the fug.
It was strange that something to which I have been previously completely accustomed, could have become so rare, or feel so evocative and bring back so many memories. 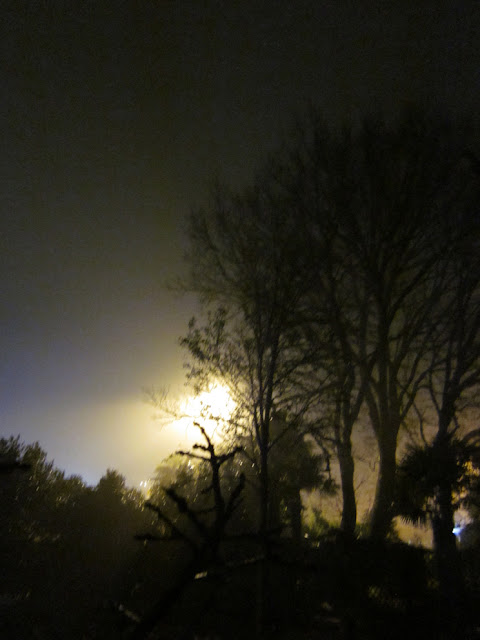