My Friend the Giant Goldfish


When faced with a myriad, a cornucopia, a rainbow, nay a bouquet of fishes, where to begin?

With a gigantic captive goldfish, of a species I think is called a comet, on account of his (of her) long tail.
I was told that this particular one was recently returned to its pet shop 'home', because it outgrew its owners' tank capacity.  I wonder what they fed it.  It really is a beauty.

I observed and drew, and looked and sketched, for three solid hours.


Rushing straight in, and trying to draw the whole thing is a big temptation.  Of course, when I looked back, the proportions were all up the boohai.

It's best to start with just bits of the object first.


The tail.  Well, tails.  There were dozens of shapes!

I mentally laid it flat and drew it so I could see the way the vein-lines went:

The more you look and try, and fail, the more you see how it really goes:

Then I became bolder and tried to draw different angles. 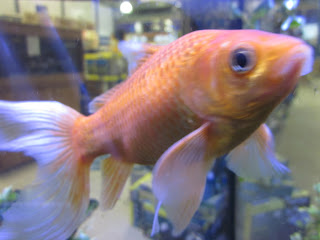 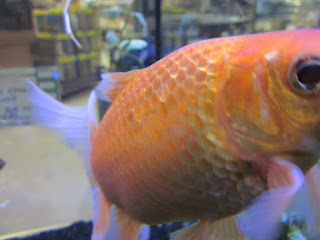 I'd like to think we have bonded.  I'm sure my comet is pleased to have some company.  Here he is coming up for a nuzzle at the glass.

Reminds me of John's banner hen.