Well, what a wonderful afternoon it was!  The sun shone, and the light breeze kept the temperature down.  Lots of lovely friends-and-relations arrived bringing sunhats and suncream, plates of delicious food and bottles of chilled drinks, and we all had a lovely time in the garden. 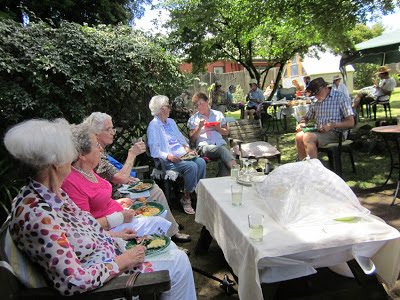 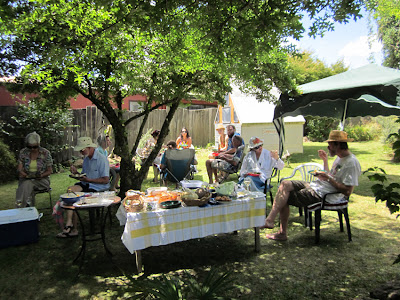 Around 4ish the elderly Matamata contingent started making polite noises about being taken home so I went up to the house to collect my car keys and sunglasses, came down the front steps, and ... whoops, halfway down I somehow stepped awkwardly, painfully rolled over on my left ankle, and went down to the ground with a crash and a number of loud exclamations that seemed to spontaneously emanate from me with no control whatsoever!
Within seconds hundreds of people appeared around me with soothing voices, concerned faces, frozen peas, pillows, glasses of water and finally a fireman's lift to the couch inside.

Granny and friend were whisked back to Matamata by oldest son and partner, and the consensus by the remaining guests was that I should get the ankle checked out at the emergency doctor.  A short car trip, a gentle but brief examination by the doctor and three ankle x-rays later, I had parted with the usual dosh and was being shown how to put on my 'moonboot'.  (These days you get the choice of plaster or a terminator-style black boot that is encrusted with velcro straps and has the great advantage that you can take it off to shower or sleep, albeit taking 15 minutes.) 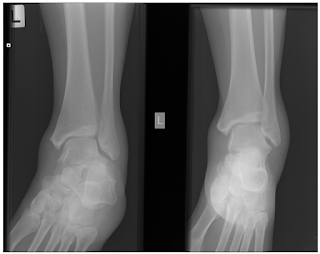 So now I sit ensconced on the couch most of the day.  I can get around on the crutches, but as the other leg's a bit sore I am trying to keep off that one too.  It's a bit frustrating not to be able to carry anything in my hands but I had the brilliant idea of using a shoulder-bag for essentials like hairbrush, phone and diary, and son J. has fixed some little wheels to a small side-table so I can 'carry' my laptop to the printer or dishes back to the kitchen.

As soon as the swelling has gone down I can get off this couch, toddle out to the studio and get back to my usual occupation - painting.

I had intended to have catch-up visits with lots of old friends this summer, so now that might involve them coming here instead.  However, as it's my left ankle that is broken, and my car's an automatic, I may actually be able to run drive before I can walk!

In the meantime I shall enjoy lying in state and being attended by my menials.  Just call me Queen of Sheba.