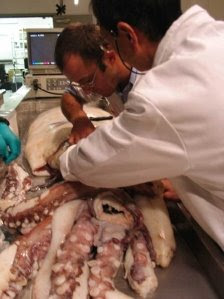 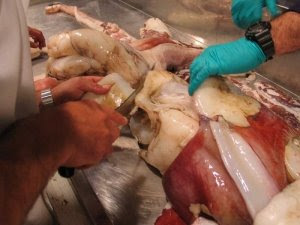 Last month a smallish 26 foot - 9 metres long - 450 kg Colossal Squid (they can grow twice that size) was thawed at Te Papa Museum, Wellington, NZ.  Only about six have ever been captured intact.  It is going to be kept in a tank of formalin so people can see it.
Colossal Squid have the largest eyes on the planet.  The size of, depending on your sporting interests, a soccer ball, football (that's rugby of course) or a beach ball.
And a two metre long er thingy (so I don't get the wrong kind of search engine looking at me) and - this is the interesting bit - a brain that weighs 22 gms.  Only 22 grams!  However it does have an incredibly well-developed nervous system so I guess I shouldn't be too scornful.
But - and this is the really interesting bit -  the brain is located around the oesophagus.  So in order to eat, it has to cut up its food into quite small pieces to pass through its brain.
They say that the way to a man's heart is through his stomach, but the way to a squid's stomach is through its brain.  Ha ha.
Now the ironical end to this story:  They had installed a webcam so you could watch it.  Watch it de-thaw, that is.  Some joker labeled it 'squidcam'.  Paint drying?
Today we found out that the government has just cut 56 jobs in the Department of Conservation because they are over budget.  I should mention that DoC spent 1 million dollars this year fighting bush fires due to the very dry weather.  Should this be its  job?   It is also involved in treaty claims and often spends big money buying up private land for conservation purposes.  And policing shellfish takes over the whole of our coastline (which incidentally is the ninth longest coastline of any country in the world.  Don't believe me?  Look here.)  DoC staff are notoriously poorly paid, and rely heavily on huge numbers of passionate volunteers to carry out tasks all over New Zealand, ranging from clearing mustelid bait stations or recording kiwi calls in the middle of (bloody cold) winter nights, to planting stabilising vegetation on sand dunes.
So now the Hectors dolphins will just have to fend for themselves. Or die out, as the case may be.  Hey!  we could put one in a tank of formalin.
Exits humming '..they put in a parking lot..."