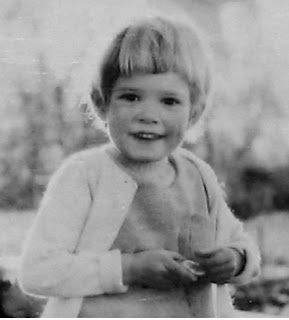 Me
...at about four years old. 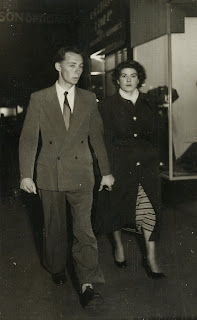 And this is my Mum and Dad before they were married.  They were engaged for about five years while they saved up for enough to buy a section and build a house.  (People did that in those days). Friday nights Dad would close up the family shop as early as he dared (Poppa said 'Eight and not a minute before!') and from the other end of town, Mum would rush off duty at the hospital and jump on a bus, applying her lipstick as she sat in the seat - she told me that when it went over the bumps she'd jiggle and rarely applied it straight - and they would meet at the flicks.  Mum said they'd often miss the first ten minutes so that's why she didn't know what happens in the beginning of lots of movies.  I love this photo of them walking along the street.  Mum said it was taken by some person who just took a photo of you and then tried to get you to buy it.  I guess they decided they would, or we wouldn't have it.  Photos like this are so rare and precious. These days we don't think anything of photographing five dying leaves on a piece of grass.