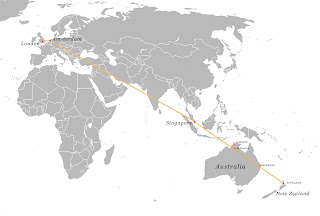 The KLM 747 was noticeably quieter than the 767 but our seats were much closer together and I felt even more like a sardine in a metal can than the last plane.  But I had a lovely ex-"Singapore Girl" (Singapore Airlines cabin attendant) sitting beside me, and, despite my tiredness, we chatted for two hours.  She told me that all Singapore Girls must retire at 35.  Certainly they achieve almost celebrity status these days, and I'm sure my gentle and beautiful seat-mate had no trouble landing her Dutch pilot husband.
We were served a cold cucumber salad and a spicy Indonesian Dutch rice dish which N. and I found too hot, but then we were too dog-tired to want to eat anyway.
When the lights went off I got about four or five hours great sleep, then dozed for another two, peeking surreptitiously out of my window at the occasional lights from villages below.  And one magical moment I saw a shooting star, feeling like I was the only person awake on the whole plane.  Soon afterwards the pilot tested our big landing lights so he must have been awake too.  I began to think what wonders pilots must see as they bring hundreds of peacefully unaware humans through the night.  I saw another plane pass us going the other way.
After breakfast my Singapore girl asked me for my address.
I didn't really know what day it was, but we were at Schipol - Amsterdam's airport.  N. said it smelled funny.  I liked the way the loo doors are all painted sky blue and each has a drawing of a famous Amsterdam landmark on it, with information about it on the reverse of the door for your edification while you sit.  I wondered if the words were opposite the door in the Men's.
N. was wearing a little plastic Singaporean charm bracelet that she found on the floor while we were waiting to disembark the plane.
In the departure lounge I got talking to a woman who had just spent the last two weeks working on the Galapagos Islands.  She was brown and lean and fit-looking and reminded me of Jane Goodall.
The last leg was over quickly.  We were hardly up than we were coming down again; new plane, sardines again.  England is sunny and hot.  We took about an hour to get through Heathrow passport control, and there was the welcome faces of Dorothy and Oliver waiting to take us to 'Gateway Cottage'.