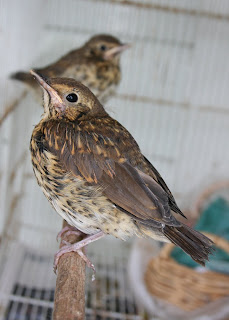 The thrush babies Victoria and Alexander are eating more than ever and rapidly growing their tails and pin feathers. It was only a few days ago their tails were significantly shorter.

We let them have their first fly around the bathroom today. They crashed into everything and tried to land on the most unlikely of places like the dado and the venetian blinds. But they had a great time, until it got too hot in the closed up room and they started panting.

In the last few days I've tried them on worms too and when they first saw them, they were delighted! If they could have smiled with glee and 'Hurrah-ed', I'm sure they would have. As it is, they get very excited when they see me coming; jumping up and down on their perch, pipeing with little nervous loud shrieks and flapping their wings.

Now, I don't mind rooting through the leaf litter in the more far-flung and abandoned parts of the garden. I don't mind picking worms up and putting them in a jar. I have no compunction feeding the small ones to a joyfully proffered open beak. But I have terrible trouble chopping up Live Fat Wriggling worms. My son appeared in the kitchen looking anxious at the 'Auughhh!' 'Auughhh!' noises I was making with each snip of the scissors. I couldn't help it. Completely involuntary. But I have learnt something you may not know. If you chop a long worm up into six sections, each piece will continue thrashing and squirming in a most disconcerting and active manner for at least five minutes. And that's as long as it took for me to get them all chopped and down the thrushes' throats. For all I know they continued to wriggle around afterwards too. For the first time I seriously thought about becoming one of those Buddhists monks who will even sweep the ants out of their way....

Still, these two babies are my responsibility, and I must get them used to the wild way of life. It's going well so far.

However, I have a wee problem. I've been putting off thinking about it, but I've no idea how to show them how to get their own food. I just can't see myself hopping about the grasss with my head on one side and then accurately stabbing my face down into the soil and finding a worm. With my tinnitus, I can't even hear the ciccadas, let alone the sound of a worm moving through subterranean tunnels. Ideas anyone?