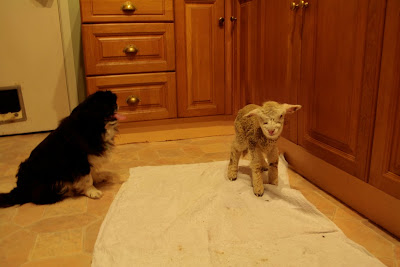 No not a recipe. Quite the opposite, in fact. I nearly skittled this one coming down the Kaimais at 9.30 last night. Luckily I spotted the tiny form in the headlights in time. It was just standing there weakly bleating with its tail all tucked up. It doesn't look as though it's even had one feed. What's a seething mass of maternal instinct to do? Luckily when I got into town the Countdown on Cameron Road was still open so I bought some baby formula and a trio of "Tommee Tippee" bottles and she had 70 mls last night and another 70 mls this morning. Shelly adores her and can hardly leave her side. Don't laugh, but I bought disposable nappies (diapers) too, but I've no idea where the tail should go. Duh. So there were some healthy dollops of myconium on the lino this morning. Easily wiped and sprayed sterile again. (My kitchen floor is cleaner than it's ever been before with all this wiping!)
I'm a little concerned with her breathing 'though. It's a bit rattly. I suppose I'll take her to the vet's this morning. Although it's Saturday, he opens between 9 and 12. And I can pick up some proper lamb's teats from Farmlands on the way home.
I'll keep you posted.