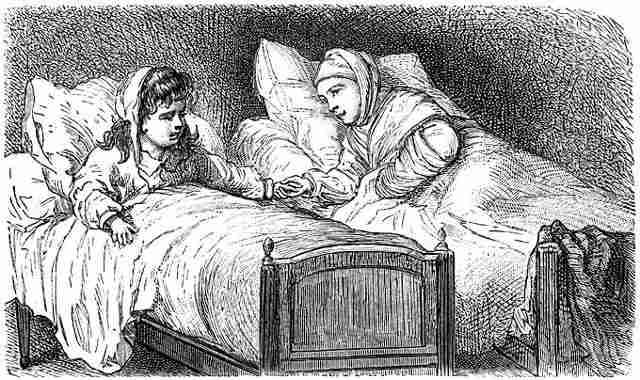 It is a truth fairly recently discovered that as we began to light our streets and homes, our sleeping patterns changed.
In the old days, we would head to bed about 2 hours after sunset, and began our day around 11 - 12 hours later, having had a period of an hour or three of wakefulness in the middle.
After about four hours sleep, we would tend to wake for a while.

This bimodal pattern was so common that researchers have had trouble finding information about it, because, well, who bothers to write about something that is so universal?
So, what did people do in this time? Apparently people would do things like; get up and go to the toilet, lie in bed and chat to the bedmate, make love, or get up and read a little, maybe make a drink, stoke the fire, or just lie there, thinking about things. Some people went next door and visited the neighbours.
It has been proposed that this waking time gave people a chance to mentally or verbally sort through daytime stresses and concerns, and to develop strategies for dealing with stress, and solve problems.

This is a period of time that began to shrink and now that people tend to stay up or go out later at night, it has almost entirely disappeared, as people expect to be in bed for only about eight or nine hours at the most, and sleep in one stretch.

It has also been suggested that many common stress symptoms exhibited by people today might not exist if we still were 'abed' for the amount of time that is 'normal'.

When I read this I thought I would try going to bed earlier, and it worked for a while.  I even lit candles when I got up at night, to reproduce the orangy-er colour of light (fire in some form) after sunset, that is supposed to stop you waking up too much.

However culturally our lives have changed.  I sometimes get phone calls at 10pm … I get invited to movies that begin at 8pm, and people have expressed concern that I have 'insomnia' when I told them I get up and read for a couple of hours every night. Like experiments in polyphasic sleep, that my son tried, you don't really fit in.

But I have found that there is a free Mac application that helps a bit. After sunset it changes the colour of your screen, gently 'warming it' to go a small way towards emulating the 'normal' light spectrum you are more likely to have entering your eye after dark.  You could say it's only a little thing, but it's great, and the interesting thing is, it feels quite natural.