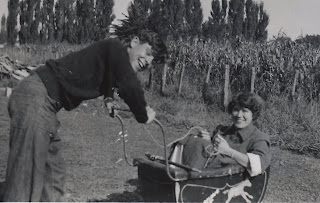 Mollie, trainee nurse, with her brother.
When my Mum was about 17 she left Cowplain School in Portsmouth and came out to New Zealand under the 'Assisted Passage' scheme, enrolling at Waipukurau Hospital in Hawkes Bay as a trainee nurse.
My many memories of her are punctuated by her giggles and stories about larks she and her fellow nurses would get up to.  These were revived and retold often due to frequent (it seemed to me) 'Nurses Reunions' which she always attended with great enjoyment. But then my Mum always seemed to be laughing about something or other most of the time.
One story involves a very difficult patient; a man who seemed to enjoy making life miserable for the nursing staff and the other men in the ward and who complained a lot, despite not being very ill at all.
Mum and her crony hatched a plan.  They explained to him that he needed an enema, and pulled the curtains around his bed.  They asked him to lie on his front, and wheeled in the equipment. The next bit usually involves a tube and a stand and a bottle of warm soapy water.  Except that being on his front, the man didn't realise that instead of the tube, he had inserted in his bottom the stem of a daffodil, it being spring.  Then the curtains were pulled back with a flourish, revealing his indignity for the amusement of the patients in nearby beds, while Mum and her friend left the ward for ten minutes.