Tui through my studio window.

(Ignoring the indifferent visual quality, just listen to this clip while you're reading the rest of this post.)
The last couple of months a Tui has been visiting our house once or twice a day to check out the cobwebby windows of my studio and eves. 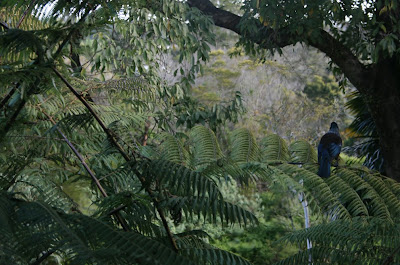 Above is a photo I took a month ago just as he was leaving.  You can see the wonderful blue-green sheen to his feathers.
And finally today I got two more better photos of him (or her)...  What a thrill.
Tui is a unique New Zealand bird, not found anywhere else.  A bit larger than a blackbird, he is a good flyer (unlike many other NZ birds),  adaptable so quite common, has a distinctive singing voice, replete with clicks and squawks, and is  a consummate mimic.  He belongs to the honeyeater family. 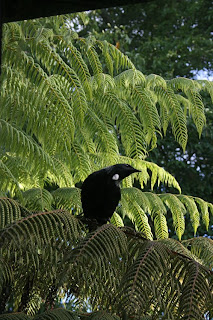 You can see the white tuft of feathers at his throat (the reason why Tui was called the Parson Bird by the first European New Zealand settlers), and the lacy white feather collar over his shoulders.  He's looking up at the eaves for spiders and small insects, but in vain because unfortunately I cleaned the windows yesterday.
And if you look very closely you can see a tiny touch of orange on the top of his head.  This will be the orange pollen from the few flax flowers that are just coming out.  He's been popping his beak in to get the sweet nectar, and the pollen has accumulated on his head.  There aren't many out just yet, so he's still supplementing with insects.  Tui are one of the few birds in the world that have long feathery tongues so they can collect nectar better. 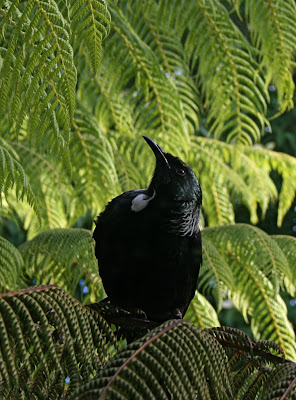