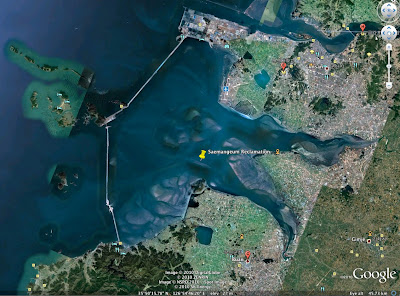 Click on image to enlarge.
Saemangeum is an estuarine tidal flat on the coast of the Yellow Sea in South Korea.
It was dammed by the government of South Korea's Saemangeum Seawall Project, after a long fight between the government and environmental activists, and was originally scheduled to be converted into rice-growing agricultural land. However Korea is now a net exporter of rice and it is now planned to be a tourist destination and top-end residential housing and parklands.
Prior to 2006, this area had played an important role as a habitat for migratory birds. The completion of the seawall (that you can see in this Google Earth screenshot I just made) is likely to be a major contributor to the decline of many species. Around 400,000 shorebirds depended on the Saemangeum estuary as an important feeding ground on the 24,000 km migration between Asia and Alaska and Russia, including the two endangered waders Nordmann's Greenshank and Spoon-billed Sandpiper (each species with fewer than a thousand surviving birds).
A conservation organisation has accused authorities of having failed to monitor the project's impact on local wildlife in a transparent way, and carried out and independent monitoring programme in 2006. The project of filling in the estuary was begun in 1991, but was slowed by a series of court actions by environmentalists.
The completed seawall is some 33 km long, and replaces a coastline that was once more than 100 km long.
After the estuary has been completely filled, an area of about 400 square kilometres will have been added to the Korean peninsula, making it one of the biggest land reclamations in history.
The Saemangeum seawall was completed in April 2010, officially becoming the longest sea-barrier in the world. On August 10 this was certified by the Guinness Book of Records.
The plans for the development of Saemangeum are due to be completed in 2020.
Environmental groups such as Bird Korea, and delegations from the Miranda shorebirds Trust, New Zealand, are promoting greater awareness of the enormous impact of reclamations in the Yellow Sea.
Some are calling for the seawall gates of Saemangeum to be opened, saying that it is not too late to reinstate the tidal estuary back into the high-producing food source stopover critical to migrating wader birds.
This information has been adapted from Saemangeum, Wikipedia
More information on this topic is available. For example:
• 'Ethical Investor' article dated 23 March 2010
• Birds Korea about Saemangeum.
• Korean 'Intelligent Technology' Times article dated 29 March 2010 Saemageum to be Reborn as the Stronghold of Global Business.