I have taken up the challenge. For the rest of the year, once every two weeks I will post an image that I hope meets Dijea's criteria for the fortnight.
The theme for this fortnight is 'Black and White'.
My offering is a shot of Waipunga Falls.
This is a very spectacular triplet of falls in a natural bush setting, and surrounded by New Zealand flaxes, which I think nicely echo the cascading of the water over the rocks at the bottom.
Most people photograph the complete falls, which are distinctively tall. I zoomed in to the base, as I wanted to take advantage of the wonderful angle down into the gorge that the lookout offers.
This day was rainy, and the spray and mist from the falls mixed with the gentle drizzle to create subdued contrasts and an almost hushed, softened, still image, despite the tumult and roar in real life. 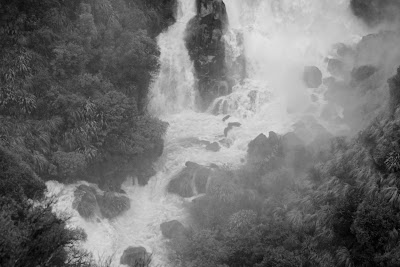 Waipunga Falls, New Zealand. September 2010. Canon EOS400 D Digital. 1/100. f/5.6. ISO 100. 55mm.
(Image should enlarge with a click)
Waipunga Falls can be seen by simply driving to the lookout about 50 metres off State Highway 5 between Taupo and Napier (11 km north of Tararewa). You can see the complete falls here.
Added later: I see I got the challenge wrong. It's two photos a week, not one a fortnight. OK. I'm up to it still!