New Zealand, compared with many other inhabited parts of the world, is rather windy.  Most of the two islands that make us up, sit between -36 and -46 degrees latitude, and the old name for anything between -40 and -50 degrees south of the equator was the 'Roaring Forties'.  The worst bit is the gap between the two islands, Cook Strait.  Unfortunately our capital city is very close by, and is nick-named 'Windy Wellington', or sometimes less politely, 'The Armpit of New Zealand'.

Of course out at sea the wind has nothing to deflect it, unlike when it passes over land.  So it's usually much worse out there. 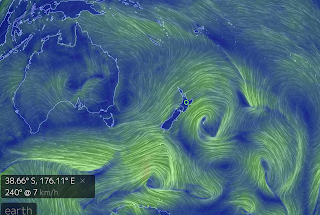