Today we had a tour with John, Dot and Oliver.
First stop was ORFORD CASTLE, an impressive Norman style keep, built by Henry II in 1163 to defend the coast and port he developed, but which was never needed to be used in battle. 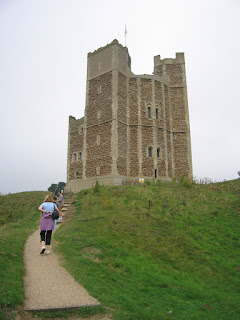 Orford Castle
The polygonal keep with three towers, one containing a set of circular stairs, is all that remains today, but it is in excellent order. 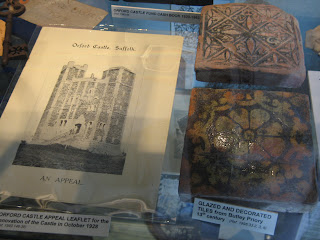 12th century tiles.
The keep contains a little chapel with niches, an alter, a wash-basin and a slot for a portcullis. There was a nice warm bedroom/reading room with a garderobe (loo) and wardrobe behind. Apparently the wardrobes were often in the same room as the garderobes because the ammonia smell ascending the toilet drop kept the moths from the clothes!  Hence 'garde robe'. Especially important to protect the expensive garments of the clergy.
The centre of the keep contains a lower room for storage and had a well. 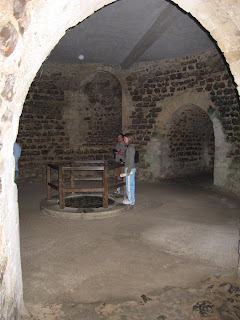 Lower storage room with well
The next room up is the Great Room with bigger windows and a high conical roof.  This was an innovative and expensive design and was used by the King himself.
The next level was a mezzanine walkway, and the top was the bakery and guard room plus lookout, and supported wooden ladders that took guards up to the three tower tops.
The towers have a very extensive view.  But the mist today meant we couldn't even see the old nuclear testing buildings, although I could just make out the shingle spit that is ORFORD NESS, that now lies between  the village of Orford and the sea, and is still growing at the rate of about 15 metres a year.  The Ness (meaning 'nose') was used as a secret military test site from 1913 to the 1980's.
I took lots of photos all around and in the castle.
I was fascinated by the garderobe exit holes in the base of the wall, and also at the vast number of mole-holes around on the hill.  This was inside what would have been the castle walls. 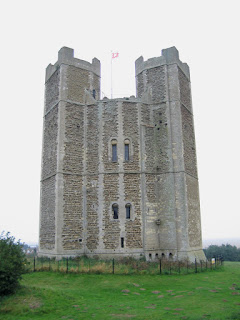 keep showing the outlets of the garderobes and molehills
The surrounding land was drained, the port busy and the village of Orford grew to be a thriving wool town for a while until the growing spit cut it off from the seas and the town became 'rotten' - i.e economically not viable, as it lost its seaport.
As I climbed to the top of the tower, the bells of St Bartholomew's began to ring out, and I wished I could somehow install the sound onto the photo I took.  It was urgent, joyful and sublime. 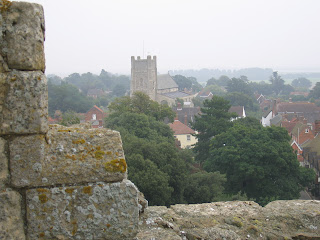 St Bartholomew's bells peal out over Orford
I also enjoyed the view of the allotments in the other direction.  Another lovely and, to my mind, practical, feature of English life. 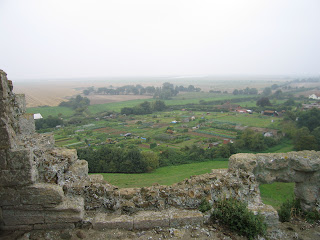 Orford allotments
We walked around ORFORD.  This is a really delightful village with many old houses, some even dating back to the 12th century. 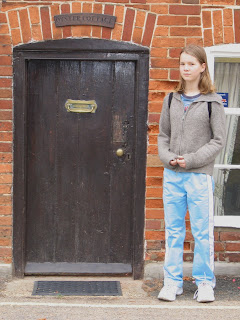 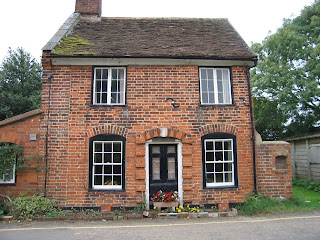 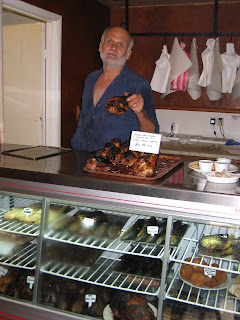 Stephen "with-a-ph-I-come-from-aristocratic-stock" Richardson
shows off his wonderful smoked chicken
John and Dot are keen on the products of 'Richardson's Smokehouse' and I tried smoked Stilton (delicious!) and smoked  trout before we wandered down to ORFORD QUAY and watched some children crabbing.  Not far from here up the coast is where the famous Cromer crabs are caught. 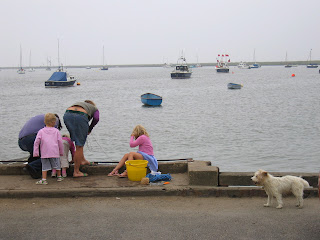 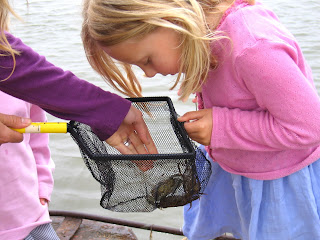 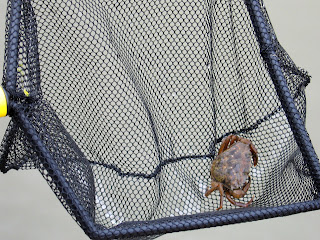 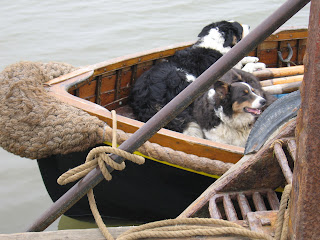