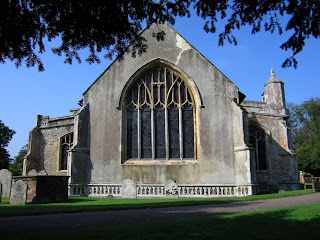 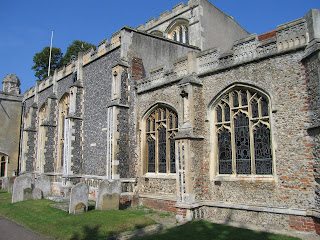 A wonderful night's sleep last night.
Talked politics at length with John this morning.
Then another picnic packed and John took Dot, N and me as far as East Bergholt where we saw the site of John Constable's home.  Now all one can see is a rather bland but expensive modern home with a plaque near the gate.  I felt a bit cheated and wondered what his home looked like.
Then we visited the old St Mary Church that has a conspicuous gap where the bell tower should be.  It was built just before the Reformation, a time when fixtures and fittings such as tall bell towers were considered vainglorious and superstitious.  So the tower was never built. 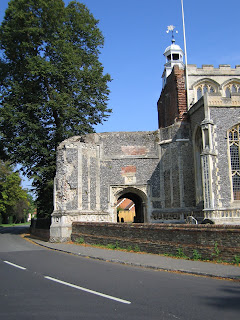 Where the bell tower isn't
So, instead, the five whopping bells are housed in a Medieval 'Bell Cage'.  What a noise it must be when they are rung!  When I looked through the wooden lattice I was surprised to see them hanging upside down, although there is room underneath for them to swing.  I wondered how they are rung. Perhaps with difficulty, as Dot said there had been a bad hand crushing some years ago and the British equivalent to our OSH - the Health and Safety Executive - have intervened.  And anyway there can be no insurance now.  So there's no bell ringing.  Amazingly the bell cage was a temporary structure erected in 1531 if you please! 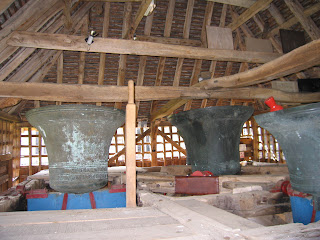 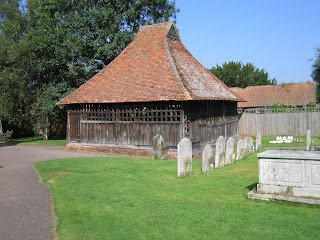 The bell cage.
I also found out that yew trees are traditionally planted in church yards.  They can grow for 2 - 5,000 years!  I was intrigued by the pretty red berries with a hole in one end.  They looked exactly like they were made out of polymer clay.  Dot doesn't like them much, perhaps because of their association with graveyards.  Also they do particularly well in calcium-rich soil.  And all parts except the berry are highly toxic. 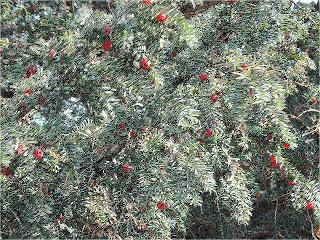 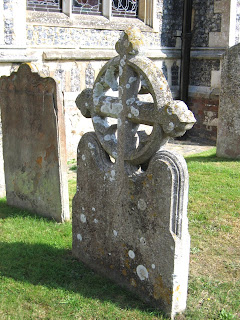