Today was the big day.  I awoke early and I was so excited I could hardly wait until it was light enough to see.  After my usual morning meal, I set off in my dugout canoe over the calm inland waters around the bays and past the mangroves until I could see the neighbouring island in the distance in front of my craft. 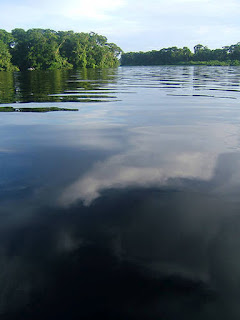 I paddled hard across the relatively short intervening strait.  About half way across I was passed by two large ships.  I later discovered these were the brand new (second-hand) Blogland Navy vessels, out searching for me.  My brown skin and strange hat probably meant they took me for one of the local fisher-folk. 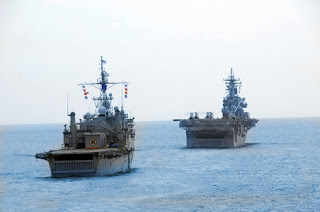 Finally, weary and with aching arms, I made it to the beach.  Nearby was a rude hut.  Being rude, I could only assume it was the so-called private beach and accommodation of Sir Yorkshire Pudding esq.  Either that or it was the home of the old, naked hermit who sat nearby eating rice. 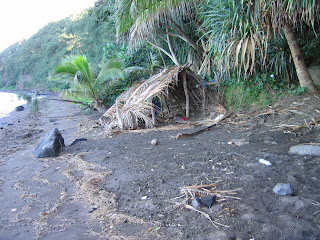 With generous gestures and a total lack of propriety, he invited me to share his humble repast, which I did with thanks and gusto, for it had been many hours since my early morning fruit and cooked pounded taro root.
After exchanging email addresses with my kind, albeit sartorially minimalistic, host, I set out on my dugout once more. 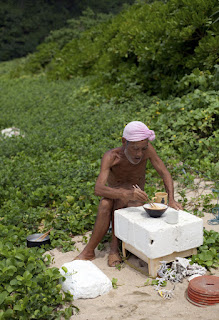 It was nearly two hours later when I rounded a stony headland that a most welcome sight
met my eyes ...
Yes indeed, I was very, very glad to see the smiling and familiar face of Sir Pudding and the distinctive fluttering pennant which announced, without a shadow of a doubt, that I had made it at long last ... to BLOGLAND!  Hurrah! 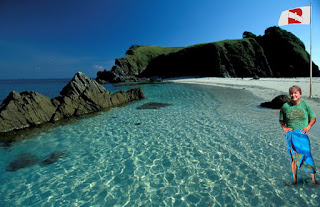