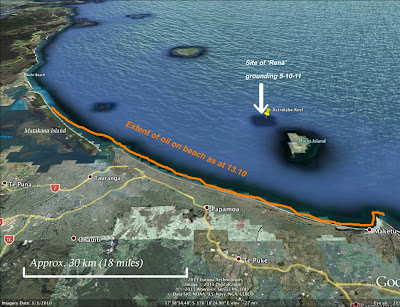 For those unfamiliar with the Bay of Plenty, here's a google map that I've annotated. Of course inland there is no effect (except maybe economic) of the oil on the beaches. In the city and cafes etc. of Tauranga and other townships around, life goes on as before. Don't cancel your summer holiday to the sunny Bay just yet!
Here are some images of what it was like out on the sands today. About 3000 people have volunteered for oil clean-up, but these are going to be called on in rotation, as the oil will be coming onshore for some weeks yet.
This group that included my son worked from 10 until 3, even in the rain. As you can see, they have been issued with protective clothing and gumboots were provided. Humvees trekked up and down delivering water and food, and transporting volunteers and defense personal up and down the long coastline to where they were needed. This area was not as badly oiled as in previous days down, due to the off-shoredirection of the winds last night. Unfortunately this may mean oil moves as far East as Whakatane. The beaches will be probably be done all over again tomorrow. And Sunday. And Monday... 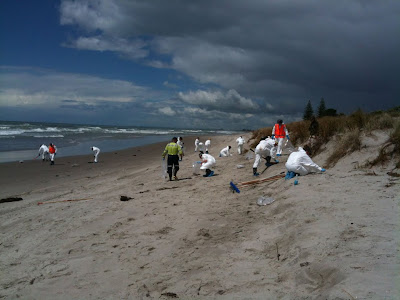 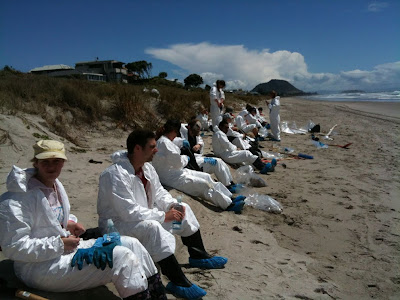 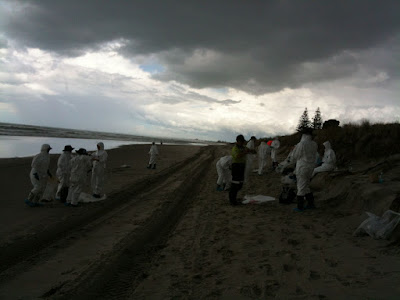 Overnight a platform was constructed and we saw this helicoptered out to the Rena today. It will be attached to the ship's side to help get pump the oil out. This is going to be a tricky job as it needs to be heated before it can flow properly. The decks are very slippery, and at an angle of 20º too. It's pitch dark below deck but at least the westerly wind shouldn't bee too strong the next few days.
They are hoping to start pumping the oil out again tomorrow.