In Bay of Plenty beaches the painstaking clean-up continues... 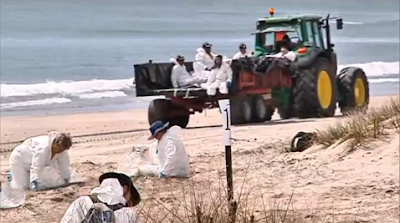 On the Rena, still out on the reef, and creaking and groaning like a Jurassic dinosaur as the two parts of her move slightly in different directions in the swell, the thick oil is steadily but slowly being pumped off onto a barge. 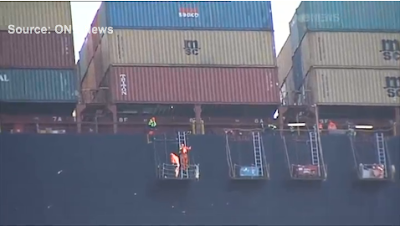 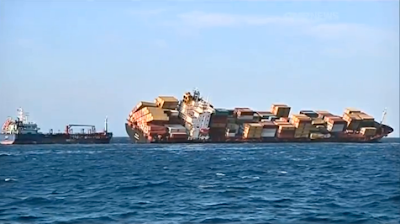 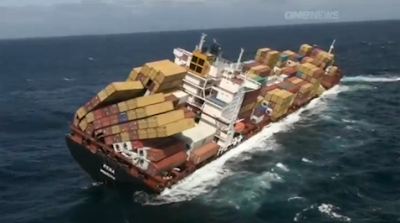 The last three days my son has been working at the Wildlife Response Centre at Te Maunga, located between Tauranga city and the beach. There is a lot of activity there. There are lots of marquee-sized tents and food caravans. It looks from the outside like a Peter Jackson film village. But there's no acting here. Inside tents people are carefully washing black oil from struggling and feisty live birds, and vets are dissecting oily dead birds to officially establish the cause of death for records. Others feed meat meal and insect larvae to hungry birds.
My son and others have been making dotteral aviaries (normally a sociable species, but at this time of year they are breeding and would fight if put together) and playpens for penguins. The latter have to have netting floors to ensure their feet are not injured. There are pools for the seabirds to swim in, but they seem surprised there are no fish for them to catch!
The following photos are thanks to J: 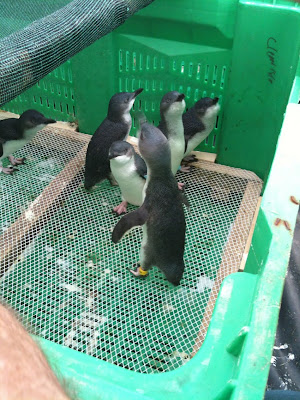 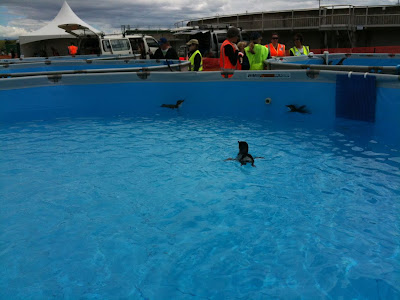 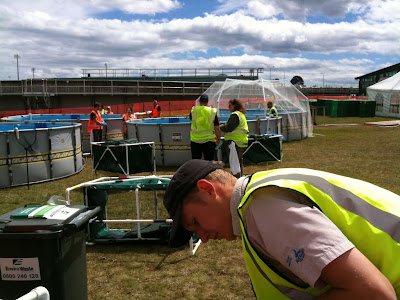 Making playpens for penguins.
(The covered pools in the background are for shags and cormorants)
Some numbers:
As at 21st October:
Oil spilled since grounding: 350 tonnes
Oil spilled since 11th October: None
Oil pumped off ship: 171 tonnes
Oil left in Rena: 772 (port tank) 356 (starboard tank)
Angle: 21º tilt (to starboard)
Amount of money in government oil clean-up fund: NZ$4 million
Amount in fund 10 years ago: NZ$12. ('wound down because there weren't enough spills to warrant it')
Estimated cost of Rena clean up so far: NZ$4 million
Containers overboard: 88
Containers unknown whereabouts: 29*
Containers still on board: 1280
Birds dead as a result of spill: About 1300
Birds being cared for at the Wildlife Response Unit: about 285
Dotterals in existence: about 1700
Dotterals in Bay of Plenty area: 150 - 200
Dotterals pre-emptively captured since spill: 60
Dotterals' Insurance Policy
* Number of containers lost somewhere at sea each year: up to 10,000